The Transients made their reappearance again today. Still running around the same are and not quite down to Powell River - but almost! Then the Pacific White Sided Dolphins came to the South end of Powell River, but didn't go by. Perhaps they heard the Orca and decided that discretion is the better part of valour.
Susan MacKay, Whales and Dolphins BC

June 19:
3 Transient Orca - Reports throughout the day:
5:30 pm They were breaching and tail lobbing around Mace Point, Eastern end of Savary Island. See photos below. from Gordie Coles
4 pm Orca were just going "in circles" by Second Point, Savary Island.  from Joel, on Tenacious 3
3 pm The Transients were by Keefer Rock, between Hernando and Savary Isalnds on a very slow roll South-East. from Garry, Aboriginal Journeys
12 pm 3 Orca between Twin and Cortez Islands. 1 Large Male and two females. from Jen, Campbell River Whale Watching
10:30 am Orca reported by Cortez Reef slowly headed towards Baker Pass. from a commercial boat, submitted by Jack, Campbell River Whale Watching 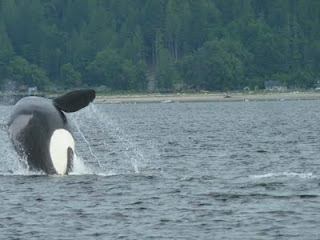 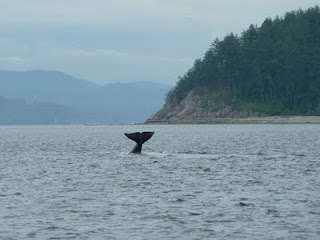 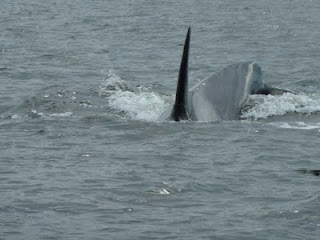 Above Three Photos Courtesy of Gordie Coles
Transient Orca by Savary Island June 19:
Jun 19:
9:35 am Over 30 Pacific White Sided Dolphins were around one block South of Grief Point, Powell River leaping and foraging. (They never made it around the point - SM) from Margaret and Trevor

June 18:
11 am 3 Dall's Porpoises headed Southward at a no nonsense pace past Westview, Powell River.
Susan MacKay, Whales and Dolphins BC