Sunshine and Whales Last Report of 2010

What a marvelous way to end 2010. The sun was out, the seas were calm and we had whales in front of Powell River!


Over the past few days I had seen some blows and even spotted a couple of dark backs, but with whale sightings, timing is everything, and I could not confirm the type of whales I saw. I did believe them to be Humpbacks due to the size of the blows and not seeing dorsal fins. With the rougher seas, I was not able to call it. But, today was another story....

After some minor repairs to my steering, I made it out on the water with 7 and possibly 8 Transient Orca just out in front of Powell River. There were many, many, seagulls picking up the scraps as these Transients fed on sea lions. I'm sure from underneath, the fish were also able to have some snacks. Photos are of Orca with sea lion flipper and a large male, both looking towards Texada Island. Actual sightings list is below. 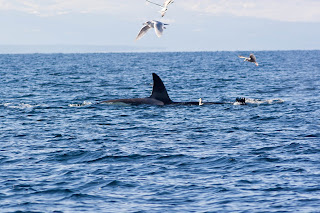 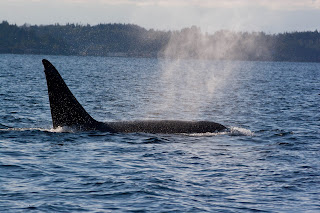 Dec 31: 7 to possibly 8 Transient Orca close to the Powell River Ferry terminal and harbour. From 11:15am till 3:15pm - I left them heading towards Sentry Shoal and Mitlenatch Island out past Harwood Island, blows visible for miles in the sun.
Dec 30: Not much time to look, but quick scans revealed nothing and no reports coming in.
Dec 29: Two to Four large blows and some dark backs between Texada and Rebecca Rocks - again couldn't confirm since it was from 4pm till it was too dark to see.
Dec 24, Dec 26: Two (possibly more) large blows between Texada and Harwood Islands a couple of times during the day. Did get a call about numerous sea lions in front of Powell River southbound and playing on Dec 26th.

Wishing you and yours
All the Best of the Holidays
and the New Year !
Dec 19 to 23 - There have been no sightings forwarded or seen over the past few days. I must admit, scanning time has also been minimal due to the rush of the season. Hope yours is a Merry one.
at 11:10 AM
Email ThisBlogThis!Share to TwitterShare to FacebookShare to Pinterest
Labels: Merry Christmas

Dec 18 - Lots of birds out just past Rebecca Rocks. Looked as if there were some splashes and even thought I saw a couple of low blows, but nothing confirmed, I'm afraid.

It's been a slow few days for any sightings. My scanning of the water has also been reduced and intermittent due to the push to complete things prior to the holidays.

Although it's a late report, there have been many Pacific White Sided Dolphins in the Porpoise Bay area in Sechelt Inlet on Dec. 6th. Some kayakers were lucky enough to spend some time with them as well as get some photographs. The photos can be viewed through Sechelt's The Local Weekly newspaper in their Archived Dec.9th issue.
at 12:39 AM
Email ThisBlogThis!Share to TwitterShare to FacebookShare to Pinterest
Labels: Sightings Dec 11 to Dec 18

Although I have been scanning the waters occasionally during the days, I'm afraid I have no whale, dolphin or porpoise sightings to report for these three days. There were also no reports submitted to me from anyone.

Dec 10 There were hundreds of birds just out past Rebecca Rocks, between Harwood and Texada Islands. There were what looked like splashes, but could easily have been the way the light bounced off the birds.

Regarding the Dec. 6th Orca whale sightings off of Grief Point, from the photos passed on to me, they were, in fact "J" pod. I managed to confirm that J26 was in the mix.

Of interest, as far as Hummingbirds go, I believe the number I now have coming to the feeder is 5. Three females and two males.
at 9:51 AM
Email ThisBlogThis!Share to TwitterShare to FacebookShare to Pinterest
Labels: Whale / Dolphin Sightings Dec 7 to Dec 10

Although I had been checking out the window regularly, I missed them, but reports are in:

Dec 5 - Approx. 20 - 30 Orca / Killer Whales were spotted by Black Point, just south of Powell River heading in a Northerly direction at around 12pm.

Dec 6 - 13 Orca / Killer Whales were spotted off of Grief Point, Powell River heading in a Northerly direction around 11am.

Dec 6 - Approx. 4-6 Dalls porpoises or Pacific White Sided Dolphins were wake riding with a fishing boat then left towards Atrevida Reef, north of Powell River at 9:15 am.

As I mentioned in my comment to the last posting, the Dec 4th Orcas were from the Southern Residents "J" Pod with confirmed J16, J17, J28 and possibly J36.

The question arises: Are these the same whales traveling around Texada Island, or do they sneak back down the Powell River side at night?

Thanks for the calls and emails with the reports. As always, they are logged and reported to the Cetacean Sightings Network for posting to their central data bank so that the movements of these whales, dolphins and porpoises can be tracked.
at 10:14 AM
Email ThisBlogThis!Share to TwitterShare to FacebookShare to Pinterest
Labels: Orca Sightings Dec 5 and Dec 6

Dec 4 - Exciting day! Around 10:30am Orca were spotted around Black Point, just south of Powell River. By 12pm they were rounding Grief Point and in front of Powell River. By 2:30 they picked up the pace and headed West, out towards Vancouver Island. Campbell River people should keep their eyes open.

The weather had smartened up and not only did we have calm seas and sunshine, there was a large number of Orca / Killer Whales to get out with. I made it out there, joined by a neighbour to get some identification photos. They were very spread out from Texada to Harwood Islands as well as closer to the Powell River shore so a definitive count was impossible. We did manage to determine that there were definitely over 20 animals, so more than one pod. We spotted at least 4 large males and 1 pretty young calf with it's mother. I don't think I have every seen so many Orca breaches (at least 12 full out of water leaps) during one short sighting.

I will post a comment to this update once I've figured out which pods these were from, but from the water it certainly looked like the A12s were in the mix. There's a fair bit of underwater noise with the construction of the North Harbour, mill, tug boats and ferries, so could not pick up any good vocals to help with pod confirmation. What I did hear though, was not the typical A clan calls.

There were also some either dolphins or porpoises with them, but no-one could confirm which species since there were no large leaps which would usually indicate Pacific White Sided Dolphins. Seeing Dolphins or Porpoises traveling with Orca in itself would confirm that these were Resident (fish eating) Orca, since Transients are meat eaters. Out on the water, I only spotted some smaller splashes which seemed to disappear.

Dec 1 to 3: There were no sightings that I'm aware of, but the weather was not conducive to easily spot anything.

I also received a late report that there were Pacific White Sided Dolphins that were spotted from the ferry around 3:30 pm between Comox and Rebecca Rocks on Nov 30th. These were probably some of the Nov 28th group I had spotted off the top of Texada.

The ferry Queen of Chilliwack is still on the Comox-Powell River run and the dolphins are not as fond of bow riding with this ferry as they are with the Queen of Burnaby, so they don't travel with it for longer periods of time.

Thanks for the calls reporting the sightings - rest assured they get logged and reported.

PS I'm back to having at least 3 different Hummingbirds at the feeder - guess they didn't leave the area when it was so cold. Still no idea where the Humpback whales got to.
at 10:16 AM
Email ThisBlogThis!Share to TwitterShare to FacebookShare to Pinterest
Labels: Whale Sightings Dec 2 to Dec 4

It's been a slow period as far as whale, dolphin or porpoise sightings go. Scanning the waters in front of Powell River in between work has produced only one real sighting - see below. The wind generated waves make it very difficult to spot these animals, and I have heard of no other reports of sightings.

Nov 28 - Around 50 (plus of minus) Pacific White Sided Dolphins were headed southward around 4pm from Rebecca Rocks towards the west side of Texada Island. The only way I was able to confirm what I saw, other than just splashes, was that a few of them did leap out of the water.

Not sure what happened to the Humpbacks that had been seen, but since our snow and cold snap, I have only seen one hummingbird coming back to the feeder.
at 11:43 AM
Email ThisBlogThis!Share to TwitterShare to FacebookShare to Pinterest
Labels: Dolphin Sightings Nov 26 to Nov 30
Newer Posts Older Posts Home
Subscribe to: Posts (Atom)
SUBSCRIBE
For FREE Email Updates