Real Time Monitoring Station Update: We're LIVE!
Connect to our first installation mounted at Beach Gardens Marina click on our YouTube Channel Live Link. Please bear with us as we work on the transmission problems causing the intermittent bouncy images. Even with the bouncy images, we still managed to have a couple of whale sightings. The hydrophone (underwater listening) installation will follow.

Thank You to all our hardworking volunteers and contributors!

Our team of online Volunteers continue to do a great job in making sure all your sightings reports are mapped and published regularly. Would you like to join us?

19:05 • est. 3 Biggs Orca travelling, heading north-west between Myrtle Rocks and Texada Island, Malaspina Strait. One large whale with slight lop of dorsal fin to left side, one smaller than first, one much smaller than both others. Observed from Garnet Rock Campground. ▫ Observed from Shore

14:00 • Biggs Orca along the shore of Raza Island across from Redonda Bay, Deer Passage. ▫ Leaving the Scene

11:00 • 3 Biggs Orca breaching, heading west in Gabriola Passage off of Pylades Channel. We saw the Prince of Whales boats and other boats and knew something was coming. Then, 2 and finally 3 very large Orca were seen and spent about 15 minutes in the little cove by our property. Some spouts of water, very large dorsal fins, and flapping their tails in the air. Big as we have seen Killer whales before. They left in a westerly direction and we saw them looking out from Gabriola and at Valdez Island. A great feat of nature today..and one that made an impression. ▫ Observed from Shore

18:19 • 6 Humpback Whales heading north off Texada Island, Georgia Strait. They were heading north and then turned around to head south.

16:44 • 3 Humpback Whales heading south off Texada Island, Georgia Strait. They were mid channel and were resting at times.

15:30 • 2 Humpback Whales heading east along the north-west side of Cortes Island, Sutil Channel. Swam across the bay, coming up for air frequently.

10:14 • 4 Humpback Whales in the middle of Penn Islands, Sutil Channel. In pairs.

09:52 • 2 Humpback Whales in Upper Rapids at the north side of Quadra Island, Okisollo Channel.

14:18 • 2 Humpback Whales off the shoreline of Carrington Bay.

16:30 • 1 Humpback Whales a couple of miles north of Fawn Bluff in Bute Inlet.

10:00 • 2 Humpback Whales moving quickly, heading north about 5-miles north of the ferry terminal of Comox, Georgia Strait. On surface adjacent to sailboat for several minutes. Then tails up and dived below surface. ▫ On Scene

09:00 • 1 Humpback Whales moving slowly, heading north-west off the estuary of Qualicum River, Georgia Strait. Seen from shore near the mouth of the Big Qualicum River. Swimming slowly close to shore, coming up for frequent breaths. Lingered at the outlet of the estuary briefly, then swam away in a northward direction. One very poor quality photo available. ▫ Observed from Shore

13:00 • Humpback Whales breaching, in front of Westview, Powell River, Malaspina Strait. Lots of breaching and blows; a show of a lifetime.

17:45 • Humpback Whales in front of Westview, Powell River. Also heard blows at night of the 14th.

16:18 • PWS Dolphins back and forth between Okisollo Channel and Nodales Channel, Discovery Passage.

13:05 • 2 Dalls Porpoise foraging, heading south-east off Tent Island north of Crofton, Stuart Channel. Foraging in circles, and then moved on at very fast clip. ▫ On Scene They’re exasperating, those creatures that flit across the path or in the wake of boats, leaping and diving so fast we barely see them. Usually the non-expert isn’t close enough to tell apart the harbour porpoise, Dall’s porpoise and Pacific white-sided dolphin. These speedy small cetaceans seem to have nothing to do in life but cavort, feast and have fun.

Their colouration is similar, and we glimpse only a black, white and grey blur as they hyperactively leap about. Had we time to look closely we could see a white-tipped fin on the back of the Dall’s which distinguishes it from the harbour porpoise. Or was it the more rare Pacific white-sided dolphin we saw? This cetacean is larger than a porpoise, but unless they’re side by side it’s hard to tell how large is “larger”.

“Porpoise” comes from “porcus piscus”, or pig-fish as the ancient Romans called it. Linnaeus, father of species classification, gave porpoises the name Delphinus Phocoena or “dolphin seal”, because they resembled both — so we’re not the first to be confused. The Dall’s porpoise is named after William Dall, a quartermaster on a whaling ship who collected the first specimen off Alaska in 1873.....

KEKAHA — Researchers encountered something new off the coast of Kauai during an 11-day August field project — a probable hybrid between a melon-headed whale and rough-toothed dolphin.
“It was side by side with a melon-headed whale as a pair, which was strange because it’s unusual to see such a small group,” said Robin Baird, who headed up the project with Cascadia Research.
Melon-headed whales are a rare sight off Kauai because the population that hangs out around the island cruises throughout the entire archipelago, as opposed to the resident population that lives off the Big Island.
In addition to the probable hybrid, the research team encountered a group of about 200 melon-headed whales during the project, which started Aug. 4.
“It’s unusual off of Kauai, for sure,” Baird said. “And we were able to get a biopsy of the probable hybrid and it’ll be easy from the genetics to say what species (it is).”
The coloring of the probable hybrid, nicknamed Oreo by the crew, is blotchy and reminiscent of the coloring of a rough-toothed dolphin.... 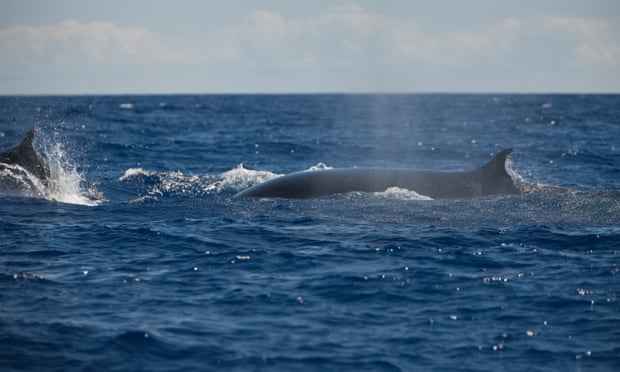 Populations of the endangered blue and fin whales, which were hunted nearly to extinction in the 20th century, will not have recovered to even half of their pre-whaling numbers by 2100, according to a new Australian study.

It found that three species – the Antarctic blue (Balaenoptera musculus intermedia), fin (Balaenoptera physalus) and southern right (Eubalaena australis) whales – will have recovered to less than half of their 19th-century numbers by the start of the 22nd century, despite bans on hunting those species being introduced in the 1960s, 1970s and 1930s respectively.

Humpack whales (Megaptera novaeangliae), which are currently at 32% of their pre-whaling population, ...

Two helpless whales were rescued within three days of each other after getting caught up in fishing ropes.
The incredible operation to save the whales was caught on camera in Hermanus, South Africa – a destination that attracts thousands of British tourists every year.
Footage shows the whales becoming entangled in the ropes and flotation buoys that are used by fishermen in the area.
In both instances, whale watchers contacted the National Sea Rescue Initiative to come and free the whales using specialist cutting gear.
NSRI crew rescued the first whale on Sunday, after turning up and finding them in severe difficulties off the coast at Kleinmond.

Can we find a way to share the sea with those majestic giants of the deep, the North Atlantic right whale?

The question is urgent.

With only perhaps 500 of the endangered marine mammals left, a spate of right whale deaths in recent months has alarmed all concerned with saving these cetaceans.

At least 13 right whales have died off the Atlantic seaboard this summer — 10 in the Gulf of St. Lawrence and three more in U.S. waters. Necropsies so far point to ship strikes and fishing gear entanglements as responsible. PORTLAND, MAINE—Fearing an existential threat to one of the largest mammals in the sea, the United States government has launched an investigation into a string of deaths of endangered North Atlantic right whales.

At least 13 of the whales have been found dead this year off Atlantic Canada and New England, an unprecedented number experts say threatens the survival of the species.

“The North Atlantic right whale is one of the most critically endangered populations of large whales in the world,” David Gouveia with the U.S. National Oceanic and Atmospheric Administration’s fisheries branch said Friday....

Twelve years of data on the health of two Atlantic bottlenose dolphin populations paints a grim reality concerning the wellbeing of the Atlantic Ocean.... "When we look at more than a decade of research, analyzing long-term health data and trends and a variety of environmental factors, we see a number of red flags about the health of our oceans and what it could potentially mean for human health," said Dr. Gregory Bossart, lead author of one of the companion papers, HERA federal permit holder and Chief Veterinary Officer and Senior Vice President at Georgia Aquarium.

The papers examine biological samples and data from 360 dolphins living in two populations -- one living near Charleston, S.C. (CHS) and the other in Florida's Indian River Lagoon (IRL) -- and each focus on one aspect of dolphin health.

Magazine Submissions
the magazine accepts submissions of links to published articles and media of interest to our readers. we welcome original articles, letters, notices, photography, video and audio

SUBMIT to the magazine

original material guidelines
notices: 100 words max.; letters & articles: 500 words max.
you or your organization must be authors of the work and are solely responsible for its content. the magazine gives no assurance material submitted will be published. media submission guidelines