Today was a day of Dolphins and Porpoises again. There were no Orca sightings reports from anywhere today (that is from Washington State to Queen Charlotte Strait). A couple or three Humpback Whales at the top of Johnstone Strait, one in Washington State. And some Minke Whales around the Seattle area. US information thanks to Susan Berta and Howard Garrett, Orca Network
Susan MacKay, Whales and Dolphins BC

June 5:
Around 12 pm approx. 60 Pacific White Sided Dolphins were spread out in a feeding / foraging pattern between the Powell River Mill and Atrevida Reef. Looked like they were working Northward, but lost them after a bit so unable to confirm.
Susan MacKay, Whales and Dolphins BC

June 5:
Around 1:30 pm 6 Pacific White Sided Dolphins by Howe Island, Discovery Passage by the entrance to Nodales Channel.
3 pm Several groups of Dall's Porpoises were spotted between Dent Rapids and right into Bute Inlet on the back side of Stewart Island.
4 pm 4 Harbour Porpoises were right in Beazely Pass, Surge Narrows and shortly after another 2 Dalls Porpoises were in Hoskyn Channel.
5 pm On his way back to Campbell River, Garry also spotted 5 Pacific White Sided Dolphins by the Cape Mudge Light.
Although they tried, none of the tours found the Transient Orca from yesterday (see Photo below).
above reports from Garry, Aboriginal Journeys 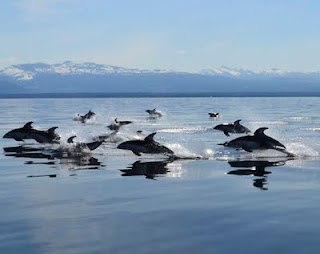 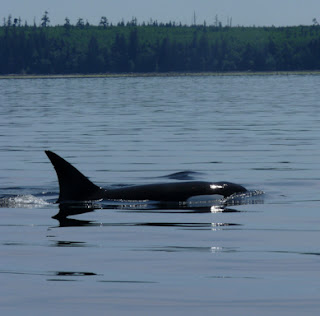