Best Wishes of the Season 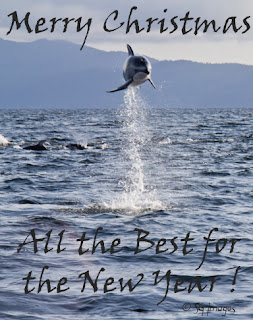 There's excitement over a new Southern Resident Orca calf in the San Juans, and Pacific White Sided Dolphins have been spotted in the Howe Sound and Saltery Bay areas. Looks like the Humpbacks that were in the Jervis Inlet / Hotham Sound area have finally decided to head to warmer waters.
Wishing you all a safe and happy holiday!
Susan MacKay, Whales and Dolphins BC

Big news! It's been kept quiet to make sure all parties confirmed, but NOAA's NW Fisheries Science Center and the Center for Whale Research have confirmed that on December 17, 39-year old J16 (Slick) gave birth to a new baby calf in Puget Sound, probably only a few hours judging from the fresh fetal folds, before being seen and photographed by veteran field researcher Candice Emmons of NWSFC. This makes J16's fifth calf since her first, J26, was born in 1991. She was the sixteenth J pod orca photographed and identified by Mike Bigg in 1972, and is among the oldest whose age is known exactly. Her matriline is known as the J7's after J16's late mother.
Susan Berta & Howard Garrett, Orca Network, Whidbey Island, WA

Just spotted what appeared to be a couple hundred porpoises in a feeding frenzy north of Horseshoe Bay. 4:00pm December 21, 2011 from Sea to Sky Highway
Posted by Anonymous to Whales and Dolphins BC Sightings

December 20:
Around 11 am there were some Pacific White Sided Dolphins between Saltery Bay and Texada. Looking at the line, I can only estimate that there were around 60 to 80 of them. I was a bit too far away to be sure, but their leaps gave the species away.
Susan MacKay, Whales and Dolphins BC

Sounds like the Humpbacks are still around the Sunshine Coast, Saltery Bay to Black Point area. There were reports of an Elephant Seal, see photo below, in the Powell River area. Lack of whale, dolphin or porpoise sightings has otherwise limited this winter's postings, but for those interested in my “Winter Hummingbirds”, there are three that have claimed the feeder. One male and two female Anna's. With Christmas just around the corner, here's wishing you and yours the best for the Holidays and coming 2012 year.
Susan MacKay, Whales and Dolphins BC

I have continued to receive second and third hand reports of up to 4 Humpback Whales anywhere from Myrtle Rocks, just South of Powell River to the Saltery Bay / Earl's Cove Ferry runs. Dates have been unclear, but they seem to estimate between December 2 to December 8th.
Susan MacKay

December 6:
A rare treat this morning at 8:10am ! A humpback whale was spotted heading south down the Malaspina Strait past Myrtle Rocks. It was lazily taking long dives and frustratingly out of range of our camera. But what a great sight to wake up to.
Holly Roy

This is an unusual sight around Powell River, so keep your eyes open.

December 9:
I think it the seal my friend saw yesterday is an elephant seal????
Michael

Humpback Whales and Orca, but where are the Dolphins? Few sightings, but the photos contributed by Steven Grover of the Pacific White Sided Dolphins he took when he joined me on my skiff in front of Powell River have certainly taken the tour of the world. I have received the photos back through email from Europe as well as the US and Canada. It's interesting to follow their travels. Below is a photo I took of Steve taking one of the photos in front of Powell River..
Susan MacKay, Whales and Dolphins BC 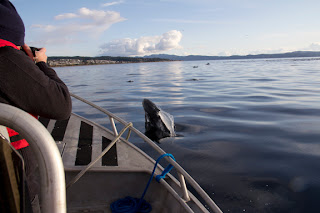 Hi Susan, A rare treat this morning at 8:10am ! A humpback whale was spotted heading south down the Malaspina Strait past Myrtle Rocks. It was lazily taking long dives and frustratingly out of range of our camera. But what a great sight to wake up to.
Holly Roy, Powell River

In the morning sometime, 4 Humpback Whales on the Ferry route between Saltrey Bay and Earl's Cove. (Sounds like these Humpbacks are still the same ones from the past week – SM)
Report through Steve Grover from Ardyth B.

4:35 pm 2 or 3 Orca blows and dorsals spotted between Rebecca Rocks and Harwood Island off Powell River. They did long dives and I only saw them about three times.
Susan MacKay, Whales and Dolphins BC

The report back on the identification of Orca seen, reported December 2nd. and photographed by Gordie Coles is as follows:
Thanks Susan, looks like the T019's. Not sure who else though.
regards, Jared Towers, DFO 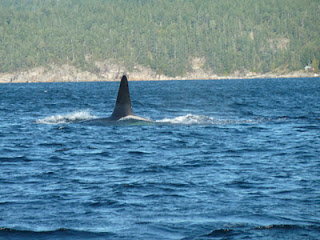 Orca / Killer Whales by Powell River, Lund and Savary Island. It seems like it's been a very long time since we've seen some whales, so it was great to get the calls and photos. In all my scanning the waters looking for them, I only managed to spot one dorsal sinking below the water. It's amazing how quickly you can get out of quickly identifying whales when you don't see them all the time. Since I'm not 100% sure of who these Orca are, I'm waiting for definitive identification and will let you all know.
Susan MacKay, Whales and Dolphins BC

11:30 am Here are some pictures, they were really staying down a long time . After I saw 7 or 8 disappear around Major Rock, 2 more showed up from the south . I don't know if those others had just done an about face and raced back or it there was more like 10 Orca. They headed towards Indian Point, between Savary and Hernando Islands and then Baker Pass, between Hernando and Cortez Islands.
11 am Gordie called: what first caught his eye was a whale breaching between Mace Point, Savary Island and Lund. To begin with he only saw 5 small dorsals.
Gordie Coles, Lund / Savary Island 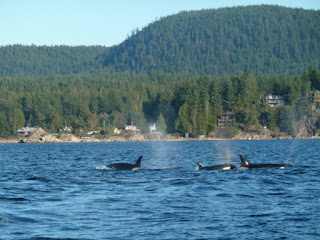 8 am Call came in that there were 5 Orca heading Northward by the Powell River viewpoint.
Janet Southcott (Alred) 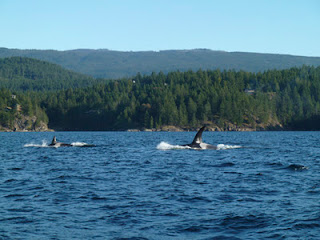 While driving home from Whistler on the Sea to Sky highway at around noon, we spotted 4-5 orcas swimming not far offshore. We were past Brittania Beach but well before Horseshoe Bay. This sighting was especially exciting, since we've watched for Orca from this road for over 20 years and this is the first time we've ever seen them there! Kris Jones submitted by Susan Berta & Howard Garrett, Orca Network, Whidbey Island, USA