Sightings of Whales moving in from their winter feeding grounds and a few Transient Orca around. Pacific White Sided Dolphins seem to have been wintering in the Howe Sound area in numbers.....wondered where they were. More Grey Whales showing up in the Puget Sound area.
Susan MacKay, Whales and Dolphins BC

March 24:
Call from regular contributor Garry Henkel of 7 to 10 Orca by Campbell River. There were 2 big males. He had heard they were Northbound by Cape Mudge around 10am and at 12:40 pm they were around the Browns Bay area looking like they were chasing seals. His call came in as he was watching the Orca breaching and spy hopping as we spoke between 6:50 and 7 pm . They did not have a direction in mind, but seemed to be milling about.
Garry Henkel, Aboriginal Journeys

March 24:
Hi Susan,
There were 4 or 5 orcas in front of Campbell River yesterday (March 24) between 5 and 6 pm, quite playful and slowly heading south. They seemed to be deliberately staying close to a couple of pleasure boats that were drifting near them.
Elaine Julian

March 23
Around 1:40 pm today, 5 orcas swam westward through Active Pass. They did some rapid porpoising as the ferry went by them. Transients?
Karoline Cullen, Galiano Island, BC submitted by Orca Network

March 19
About 4 pm today those of us on the the BC ferry 'spirit of Vancouver island' were thrilled to briefly see about a half dozen orcas in the channel between Galiano and Mayne islands.
David Freed submitted by Orca Network

March 11:
Hi, on March 11 we were at Neck Point Park in Nanaimo, at around 11 am, at a spot facing North looking up the Strait and saw 5 Orcas about 100 yards off shore. One had a very large dorsal fin and there appeared to be a baby with them. We didn't know where to report the siting. Someone told us there is a web site but didn't know what it was. Anyway I'm glad I signed up with you.
This siting was just before the Herring spawn reached here from the north. We were very excited to see this pod.
Sonja Billard

March 19:
There were hundreds of Pacific White Sided Dolphins in the Howe Sound area between Horseshoe Bay and Langdale.
Frank 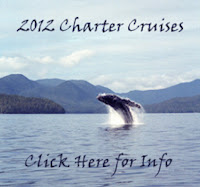 Sightings After the Storms

After the huge windstorms we've had where it was impossible to spot a whale, the weather is greatly improved. Some of the worst wind gusts logged at Merry Island Lightstation, between Sechelt and close to Pender Harbour, reached hurricane force at 110 knots (204 km/hr or 127 mph!). There's a calming in the air. All I can say, is that it's about time!

I was worried about my Hummingbirds; I didn't see a male for a couple of days only the two females. Finally they showed up, but the smaller male has a permanent punk rock hairdo. Guess the winds damaged his head feathers. Just happy they're OK.

As for Whales? There's a few reports below. Gray Whales are making their way back up the coast, though most will pass on the outside of Vancouver Island, we sometimes see them on the East side. Keep your eyes open and please let me know. Happy Spring!
Susan MacKay, Whales and Dolphins BC

March 18:
Hi Susan, Had a report from a friend that the saw 2 Orcas ( one large fin and one small fin) northbound past Cape Mudge at 3 pm March 18,2012. They had no camera with them. Makes sense they were northbound because current was ebbing then. They did say the large fin had a distinctive bend in its dorsal.
Sounds like they had a large number around Telegraph area yesterday n this morning as well. Cheers
Garry Henkel, Aboriginal Journeys

March 16:
I spotted 4 orcas traveling North up the Johnstone Strait at about 12:15pm today, viewed from my apartment in Campbell River, BC, which is located directly across from the Cape Mudge Lighthouse on Quadra Island. I followed them in my car, stopping to take photos along the way, the last I saw them, was at Brown's Bay, at 2:45pm, still heading North.
Tara Bladon, Campbell River, BC
Dave Ellifrit identified:The bull is T11A and T11 is in there too.
Report submitted via Orca Network, Washington 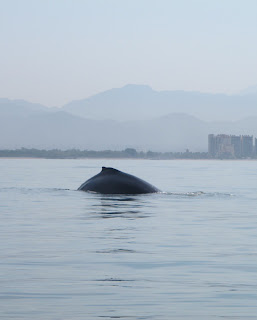 March 16:
We saw this mother and baby today off Nuevo Vallarta, Mexico today. The Humpbacks are leaving the area now.
Michael Stewart

Lone Orca by Powell River Plus

It's the first time in a over a year that I've seen a lone Orca. They are social animals, so there are generally other whales around at the same time. Transient Orca T14, born in 1969 was known for frequently travelling alone, but there have been no confirmed sightings of him for around one year. The last few sightings of him, he was with other whales. Few more sightings reports of Southern Resident Orca, Transients, and photos of the Orca by Cape Mudge follow.
Susan MacKay, Whales and Dolphins BC 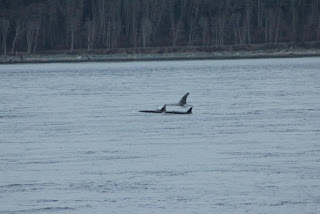 March 11:
10:20 am Caught a glimpse out of the corner of my eye of something dark in the water. Managed to get the binoculars on this one large male Orca surfacing for three more big breaths before the Texada ferry rounded the light off Blubber Bay. For 20 minutes, I kept scanning the whole area off Westview, Powell River for signs of the same or other whales, but never saw another dorsal or blow. He did a bit of a direction change initially heading towards Rebecca Rocks, but I can't even confirm that he didn't turn back South-East. Amazing how stealthy a large animal can be!
Susan MacKay, Whales and Dolphins BC 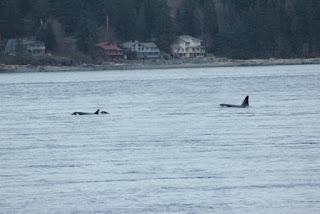 March 6:
2 + Orca were tight to shore close to Earl's Cove heading towards Egmont, Sechelt Inlet. They were spotted from the ferry.
Parsla Robertson

Additional third hand reports came in of two other sightings around either the last couple of days of February or first couple of days of March of at least 4 Orca also seen from the Earl's Cove to Saltrey Bay ferry. I hope to receive details directly from the observers and will pass the information on.
Susan MacKay, Whales and Dolphins BC

March 6
I found J Pod after a lot of searching at the mouth of Porlier Pass in rough seas. They were entering Georgia Strait and I left them pointed for Bowen Island.
Ocean EcoVentures Whale Watching - Cowichan Bay, BC

March 6
Transient killer whales T020 and T021 along with the T086A's and the T137's were off of Victoria on March 6th. We left them south of Oak Bay headed for Discovery Island at 1520hrs.
Mark Malleson, Prince of Whales

March 6
Off Clover Point (Victoria) at 2:18 pm saw a pod of what I assume were transients traveling about 3 miles to the east off Clover Point. There was a group of 5 harbour seals taking shelter along the rocks keeping a wide eye.
Maria Chantelle Tucker

Orca in Our Area

Orca again by Cape Mudge, off Campbell River. Other Sightings are few and far between. There have been a couple of Grey Whales appearing in the Puget Sound area of Washington State. The shrimp draggers are still back and forth in front of Powell River. There are cetaceans out there, but it's a big ocean – keep looking!

Sad news of this morning's passing of Spinnaker, the Pacific White Sided Dolphin who has been at the Vancouver Aquarium since being saved from a net in 1991. A necropsy is being done.

Hummingbird update: They are very happy that the winds have eased. They had a terrible time getting to the rocking feeder. My four birds are feeding a lot with the two females actually sitting at the feeder together lately.
Susan MacKay, Whales and Dolphins BC

Hi Susan, Just got a couple recent reports of Orcas in our area the last couple days. The first report was of a couple Orcas southbound past Cape Mudge, Quadra Island around 1 pm March 6th.

The second report was of at least 4 Orcas northbound past Cape Mudge, Quadra Island at 6 pm March 7th. It looks like we are seeing more activity.
Garry Henkel, Aboriginal Journeys

Large number of Orca are passing through on the inside waters again, but no word on the Pacific White Sided Dolphins. Sightings reports are few, but at least there are sightings. Some more information from NOAA below on the satellite tagging of Southern Resident Orca.
Susan MacKay, Whales and Dolphins BC

March 4:
20+ Transient Orca, possibly the same ones from yesterday's report by Seymour Narrows, were at the top of Johnstone Strait this morning. If they are the same ones, they must have turned and were headed Southward past Orca Lab in Blackney Pass around 7am.
Reported by Marie on Orca Live

March 3:
Hi Susan, Just got a report from my friend Josh Duncan on the Western King (commercial fishing vessel) that he saw 13 Orca heading just north of Seymour Narrows (Campbell River area) in a northerly direction. He said there were 3 large fins in the pod. I asked if he took photos and if he noticed any notches in the dorsals but no reply yet. 130 pm (He didn't take any photos, and didn't notice any notches. No additional information to this posting time. Susan)
Have a nice weekend, Cheers
Garry Henkel, Aboriginal Journeys Wildlife and Adventure Tours

February 29
A J pod (Southern Resident Orca) sighting from yesterday, sent by John Ford of DFO's Pacific Biological Station: We observed J pod southbound off Nanaimo at 1800 (2/29). They were heading (south) towards Dodd Narrows when we left them at dark. John
submitted by Susan Berta and Howard Garrett, Orca Network, WA

NOAA's Northwest Fisheries Science Center reports:
Southern Resident Killer Whale Satellite Tagging
March 2, 2012, update – The researchers continue their survey, with the primary goal of re-sighting J26. Although they have heard J pod members on the hydrophone several times during the night, they have not yet encountered them during daylight hours. Other researchers from Canada’s Department of Fisheries and Oceans have reported an encounter with J pod in the Strait of Georgia late in the day on February 29. The Canadian researchers confirmed that the tag was missing from J26. The NWFSC is currently searching for J pod in that general area and will continue to do so over the next several days in order to re-sight J26 and collect information on SKRW winter feeding activities. See the NOAA Ship Tracker website for the current location of the Bell M Shimada and where it has been searching over the last several days.