Transient Orca  were spotted from Lund in the morning of April 11th coming through Baker Pass heading towards Savary Island. It took them a while, but a couple of hours later I managed to pick them up by Harwood Island out in front of Powell River on the Sunshine Coast. It was great to be on the water with sunshine and calm waters for a couple of hours.

They took long dives staying underwater for a good 10 minutes at a time. They would pop up at quite a distance off if I stopped for too long. I managed to get a couple of photos of them for identification purposes and lost them after waiting for 20 minutes to pop up again.

I dropped the hydrophone, but there were no vocals from them. I did however hear some Pacific White Sided Dolphins at a distance so went to investigate. By the time I got close to their splashes, they had disappeared and become very quiet. I assume their disappearance was due to the realization that these Orca were around. Transient Orca are meat eaters and do eat dolphins, seals and even other whales. For more Orca - Killer Whale specifics go to: whalesanddolphinsbc.com

Today I received information that there were Orca by the Comox to Powell River ferry April 12 around 7:45 pm. It sounds like it probably was the same group of Transients continuing their southward direction.

at 9:37 PM
Email ThisBlogThis!Share to TwitterShare to FacebookShare to Pinterest
Labels: Transient Orca April 11 and 12

Last Friday's storm had huge winds and the Texada Ferry ran during part of it. There have been a couple of my photos published in the Vancouver Sun and Powell River Peak, and as promised in my prior post, here's a different one: 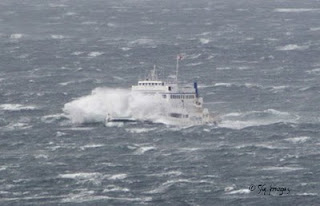 In the last few days, I've received word that there have been around 50 Pacific White Sided Dolphins in the Powell River area. They were spotted around Grief Point on April 5th. and 6th. and today I received word from another source that there was a group seen near Texada Island and around the Texada ferry on April 1st and 5th. Sounds like the Transient Orca left the area sometime after March 22nd.

Check out the main site for identification of whales: www.whalesanddolphinsbc.com I hope to get more information up on a regular basis. the latest is an updated About me page and Minke Whale specifics.
at 9:29 PM
Email ThisBlogThis!Share to TwitterShare to FacebookShare to Pinterest

After a bit of losing the pages and reinstalling them, whalesanddolphinsbc.com is up and I've managed to add bit more. The About Page is now set up correctly since the first go around, I lost and had to redo.

There are links established to Humpback and Killer, or Orca, Whales and I am, in between being very busy, working on other pages.

We had a fierce wind storm the other day which caused power outages along the coast and many people lost garbage cans down the street. I couldn't believe it when I looked out to see the Texada ferry running in the midst of high seas and winds. Of course, I grabbed the camera and will post a photo here a bit later - it's on the other computer. There was one published in the Vancouver Sun both on line and in the paper.

Hope you all have a great Easter long weekend.
at 6:59 PM
Email ThisBlogThis!Share to TwitterShare to FacebookShare to Pinterest
Newer Posts Older Posts Home
Subscribe to: Posts (Atom)
SUBSCRIBE
For FREE Email Updates