Transient Vocals and Other Reports to May 19

Here's a link to some awesome Transient Orca vocalization and video provided by Jen from Campbell River Whale Watching that was recorded on Tuesday, May 17 evening when the whales were just behind Harwood Island, close to Sentry Shoal. Well worth the watch and listen: http://www.youtube.com/watch?v=PxnJhUOuAQ4

The water was like glass today and around 7 pm I believe I saw some splashes and blows closer to the Vancouver Island side than Powell River. The distance is too great to see any dorsals. I'm hoping someone over there will be able to confirm that it was the whales as they headed Northward. From my vantage point, they disappeared behind Harwood Island.
Susan MacKay, Whales and Dolphins BC

The balance of the reports that follow are from our friends farther South, submitted by Susan Berta and Howard Garrett, Orca Network

May 18: Southern Resident Orca - J Pod was around the Whidbey Island area. Around 8 Transient Orca were seen in the San Juan Islands.
May 17: J Pod again: 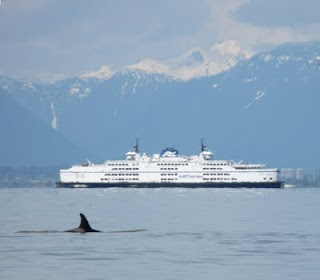 J pod and BC Ferry, Tswwassen, B.C. May 17, 2011
Photo by Susan Berta, Orca Network
It's been a long drought for whale sightings for us which finally ended today. From our deck in Tsawwassen around 12:45 we saw a small pod of orcas slowly heading north. They were very spread out.
Cheers,
Karoline Cullen, Tsawwassen, B.C.
Humpback Reports in Southern BC:
May 16
My neighbour across Sansum Narrows on Vancouver Island phoned me at 8PM to say he'd been following 2 Humpback Whales out of Maple Bay and into Burgoyne Bay. They were heading south in Sansum Narrows. Very exciting. This is the first report of the big whales here, although they probably were here before the whaling wiped them out of these waters. Has anyone else reported these 2 whales in BC?
Cheers,
Tamar Griggs, Bold Bluff, Saltspring Island, BC

May 16
Yesterday we followed 2 Humpback Whales from Maple Bay on Vancouver Island to Burgoyne Bay on Saltspring Island, and down Sansum Narrows past Burial Island. They were diving and spouting close together and it looked like there was a smaller one with a bigger one - Mum and baby? Does anyone know? They were moving pretty fast and went all the way into Burgoyne Bay where the Government wharf is and all the "live-aboards" in boats. This is the first sighting of these baleen whales EVER in Sansum Narrows - anyway since I have been here. (Whales may be sneaking by all the time when my neighbours and I are not watching). Are these whales exploring old territory? Are they lost? I believe Sansum Narrows had lots of Humpback Whales long ago before we hunted them to extinction in these waters. I'd love to hear if anyone has any ideas about these magnificent whales. We followed them for about 2 hours - from noon to 2 PM.
Best Wishes,
Tamar Griggs, Bold Bluff, Saltspring Island, B.C.

May 14  I would like to report 2 Beautiful Humpbacks my son and I witnessed on May 14, 2011 at 0945.  They were in Stuart Channel (near Crofton, BC) Chart 3442.  We joined them at Erskine Point (Salt Spring Island) and watched them cross to Grave pt and follow the shore to Sherard pt.  They continued towards the direction of Porlier Pass.  They were calm and serene each time taking 2 -3 breaths then a deep dive with tail fluke rising gracefully before descending.  They appeared to be approximately the same size (adult).  There is no mistake these were Humpback whales.  I've seen thousands of different whales including whale watching guide.  I didn't take pictures as I was video taping them.
Hope this helps,
Sandy Shaw