May 30:
Another active day today ending with great lighting and a group of Pacific White Sided Dolphins I can still barely see heading West out between Rebecca Rocks and Harwood Island in front of Powell River.
Listening to the marine radio today I was quite envious of the whale watchers. The Transient (meat eating) Orca put on quite the show (I'm waiting for some photos), as well as being very vocal. They were a bit too far for me to get to. I also had to fix my computer - done and working so that I can properly deal with photos again. I would have gone out if the whales were closer though.
Susan MacKay, Whales and Dolphins BC

May 30:
6 pm received a call from Steve G., my eagle eye neighbour, that he spotted some Pacific White Sided Dolphins between Texada and Powell River. There were between 20 to 30 of them performing some of their noteworthy leaps as they zig zagged in a foraging / feeding pattern slowly working their way North-West. Around 7:30 pm I lost them as they changed direction, yet again, and blended into the shadows close to Harwood Island shoreline. I picked them up again, as noted above, slowly heading into Georgia Strait between Rebecca Rock and Harwood Island. It's now 8:30 pm and can no longer spot them.
Initial report from Steve G.
Susan MacKay, Whales and Dolphins BC

May 30:
5:30 pm Radio call from a boater (unknown if pleasure or commercial) that there were 2 Whales by Quathiaski Cove, across from Campbell River on Quadra Island. It sounded like he said Orca, but he may have been talking about the earlier reports of either Humpbacks or Gray Whales. Thanks to Aaron, Eagle Master for the relay since I could hear the boat, but he couldn't hear me.

May 30:
5:30 pm The 5 Transient Orca had just made a Dalls Porpoise kill by Frederick Arm, by Raza Island. See report farther down also.
Aaron, Eagle Master, out of Sonora Lodge (I apologize if I have any names incorrect)

May 30:
5 pm A number of Dalls Porpoises were putting on quite a show at the top of Raza Island.
Broken transmission picked up on the radio. 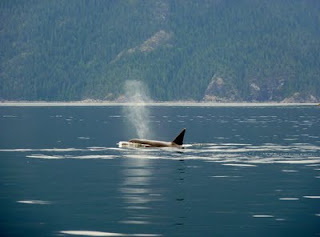 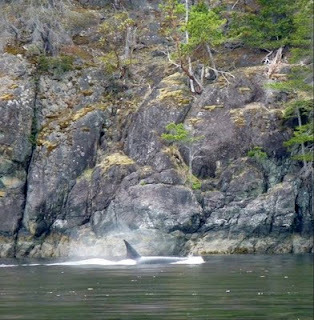 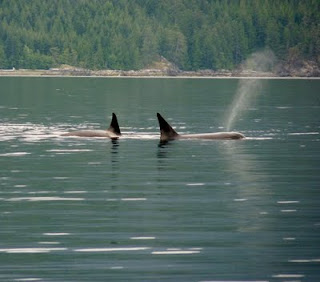 Three Photos courtesy of Garry Henkel, Aboriginal Journeys May 30th
(I believe one of the whales is T125 - unconfirmed - SM)
The rest of the reports are a bit mixed with times, due to various calls and transmissions over the radio during the day.

May 30:
11:20 am 2 Humpback Whales were reported by Campbell River, Willow Point "in front of Rona" - (sorry, that's a direct quote, but I can't help but think that maybe they were hoping to do some shopping. It gives quite the picture... SM) Possibly Mom and Calf in very shallow water. Aaron, Campbell River Whale Watching was in around 13 feet of water and they were in shallower - tight in to shore. (I hope that he managed some photos SM) Since they were so tight into shore, there is a chance that they were Gray Whales. Aaron couldn't confirm either way when we last spoke at around 12:30 pm when he left them to find the Transient Orca.

May 30:
11:15 am 5 Orca spotted by Subtle Islands near Whaletown, Cortez Island heading North towards Channel Islands - back and forth changing directions. First reported by Jeff, Fog Horn, running a tour out of Painter's Lodge. It wasn't long after that Garry, Aboriginal Journeys picked the Transients up heading towards Coulter Bay. Garry was with them for quite a while with his tour as they tail slapped, breached and took a seal or Sea Lion. The Orca slowly worked their way up to Raza Island and were still heading in a Northerly direction at 4 pm when Garry left them. See the rest of the evening report above.

May 30:
10 am Around 10 playful Dalls Porpoises were bow and wake riding with Jeff, Painter's Lodge by Chatham Point at the entrance to Johnstone Strait.

The report from farther South:
L pod made it down to the Salish Sea on Sunday, porpoising through from the north, heading down San Juan Island then apparently west out the Strait of Juan de Fuca - darn! But we received many great reports and photos from their quick trip through the area. Also more Transient reports, interestingly trading places with L pod throughout the weekend - Ts down here while Ls were up north, then the Ts appearing up north when L pod was down here! Also a Gray whale, and Dall's porpoise and Pacific White-sided dolphins in BC, and harbor porpoise in Admiralty Inlet.
Lastly, here is a cool nautical map/tool that not only has an easy zoom and shows EVERY little point, bay, cove, rock, etc. (to help you see where all these sightings are), but also has an animation button to show you animated currents and tides - try it, you'll like it! (I have not yet tried it, and do not know if it might interefere with any CHS chart software. I will try it anyone interested in my findings can email me Susan MacKay, Whales and Dolphins BC)