Nov 10 - Just as I finished posting yesterday's lack of whale sightings at 9am, I looked up from the computer to see a Humpback whale surfacing just out from the Powell River shore. After logging off the computer and grabbing camera gear, I went to see if I could get some identification photos.

The first very large whale I spotted quickly slipped past me and since it was so calm, it's huge blow could be seen from quite a distance as it made it's way Southward past Grief Point. Since it was doing long dives, I was going to head back to the harbour, but spotted another Humpback right in front of me. In the almost 4 hours I was with it, this humpback didn't fluke (show it's tail), but I managed to get a couple of hump photos by Harwood Island that show some unique markings. See the photos below. I need help with the identification, it's not one that I've seen before. Please let me know if you can figure it out. I left it around 2pm heading southwest between Texada Island and Rebecca Rocks. 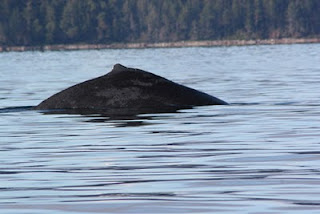 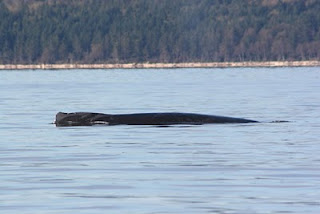 It was so calm and sunny out there. No sightings so far today Nov 11th.