Seeing Transient Bigg's Orca on the mainland side of upper Georgia Strait was a real treat as they played and shared their food in front of the many vehicles that tend to stop by the shore to enjoy them. This pod has a very young calf with another juvenile that looks less than a year old. T087, an easily identified big male with a large nick at the top of his dorsal was with this pod. He had been travelling on his own last Fall which caused some concern about his wellbeing. These are social animals. These may have been the same whales seen by Campbell River in the morning.

Other Killer Whales or Orca, the terminology is interchangeable as Orca is part of their Latin name, have also been reported by Roberts Creek, in Howe Sound and up into Toba Inlet. Howe Sound has become quite active with reports of Humpback and Grey Whales, Orca and Dolphins this report. A good sign in the recovery of the area.

Real Time Monitoring Station Update:
The mast is up and still in need of securing a couple of pieces to the very hard steel piling. We are still working with manufacturers on sorting out the audio noise problem. Although slow in coming, this hard fought project is becoming a reality. They say the first one is the worst! It would have been wonderful to watch today's Orca from there.

Orca whales return to Puget Sound, just in time for start of spring
KIRO TV News, Seattle, WA
Read the Full Article Here
On the second day of spring, KIRO 7’s Chopper spotted a group of orca whales, swimming above and below the water.

Footage captures rare moment humpback whale tenderly feeds her calf underwater
Daily Mail, UK
Read the Full Article Here
The intimate moment is extra special because whales usually nurse their young deep under the water, so visibility is limited.
The extraordinary footage was shot on Silver Bank - the main calving and breeding ground for the majority of the North Atlantic humpback whale population.

This Wild Encounter With a Very Curious Orca Shows How We Should See These Animals
One Green Planet
Read the Full Article Here
Video posted on Charles Harmer’s Facebook page shows a curious orca is in its natural habitat, free to engage with the human visitors for as long as the animal feels like. Could anyone ever see that much of an orca’s true nature and behavior in an aquarium? Doubtful.
This is truly how we should learn about marine mammals – in the wild.

For Decades, Granny Was the Leader of a Pack of Endangered Orcas. Then One Day, She Disappeared.
The Stranger, Seattle, WA

Read the Full Article Here
In September of 2016, the oldest living orca known to science, J2, was photographed near San Juan Island from a drone. Matriarch of the southern residents, a population of killer whales that lives in Puget Sound and is unique on the planet, J2 got her name because she was the second orca to be positively identified by scientists at the Center for Whale Research on San Juan Island during the first census of southern resident killer whales, conducted in 1976. The Center for Whale Research also assigns nicknames, and because J2 was so old when scientists first identified her, the nickname she got was "Granny."

"We do not know her precise age because she was born long before our study began," Ken Balcomb, the marine mammal biologist who founded the Center for Whale Research, explained. "In 1987, we estimated that she was at least 45 years old and was more likely to have been 76 years old." By 2016, she was estimated to be somewhere from 74 to 105 years old....

Read the Full Article Here
Collisions have become all too frequent, as ship traffic proliferates along migratory whale routes and feeding areas. Reports of whales being struck and killed in such impacts have increased dramatically in the past 50 years.

Watch Sea Shepherd Ship Sail with Megapod of Dolphins
ECOWATCH
Read the Full Article Here
On Feb. 25, while patrolling the waters of the Gulf of California for Operation Milagro III, the M/V Sam Simon sailed through a megapod of dolphins with numbers estimated to be more than 1,000 individuals.

The elation and joy of this sight comes with the realization that many of these dolphins' lives will be cut short due to illegal gill nets. Sea Shepherd will stay in the Gulf of California until we pull out every last illegal gill net, ensuring the safety of the inhabitants who call these waters home....

Read the Full Article Here
The iconic humpback whale has been the subject of thousands of scientific papers.
But it took nearly a decade for researchers in B.C. to discover something completely unexpected about the cetaceans’ seasonal movements up and down the province’s coast.
In large numbers as they migrate, humpbacks repeatedly return to certain habitats in what the researchers compared to a previously undetected “wave” pattern, according to the newly published study in the marine science journal Marine Ecology Progress Series.
And it turns out that humpbacks may be picking their favourite coastal fjords not just based on food supply, but also how well the whales’ singing sounds and how good they are for socializing, according to their thousands of hours of observations.

Read the Full Article Here
They are some of the largest animals on Earth, and it would seem difficult not to spot them. But the greatest threat to the whales that ply the Pacific Ocean is the increasing vessel traffic that traverses what has become a marine superhighway.
A vessel strike is the most likely suspect in the death last December of an endangered killer whale found off the Sunshine Coast, north of Vancouver.
Now vessel operators have a new tool that could help them avoid whale collisions off the West Coast.
Scientists at the U.S. National Oceanic and Atmospheric Administration have developed a program to predict where whales will be, giving vessel operators a greater chance to avoid collision.
“By the time you see a whale, it’s almost too late; and it’s probably the whale you don’t see, that’s just below the surface, that’s likely to get hit,” said Helen Bailey, WhaleWatch project leader at the University of Maryland Center for Environmental Science.
Using decades of satellite-tracking data gathered .. 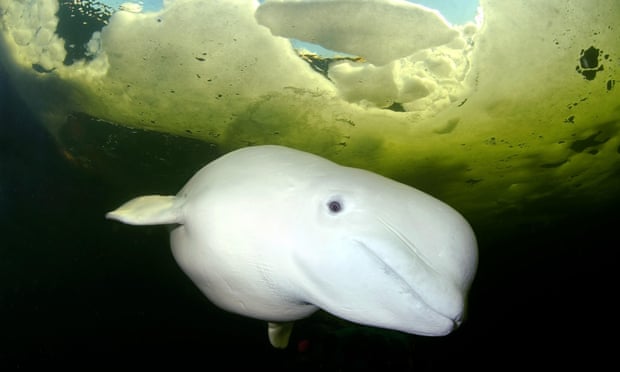 Read the Full Article Here
“These creatures are in the frontline of change in the Arctic and it is clear they are having to make considerable changes in behaviour to survive, fishing further and further into open water,” he says. “We need to find out urgently how significant are these changes.”

At the heart of the issue lies a shortage of algae on Arctic sea ice. At this time of year algae forms on the underside of floes, as spring begins in the far north. The algae is then eaten by tiny creatures called zooplankton, and they in turn are consumed by fish that are in turn eaten by seals. Later, as the season continues and the weather warms, sea ice melts and algae sinks to the sea bed, where it nourishes a different food chain. It is consumed by worms and other simple organisms on the sea floor, and these are consumed by benthic fish – fish that live on the sea floor or near it, such as the Greenland halibut. These are then eaten by Beluga whales.

An extraordinary battle between sperm whales and orcas – in pictures
The Guardian, UK 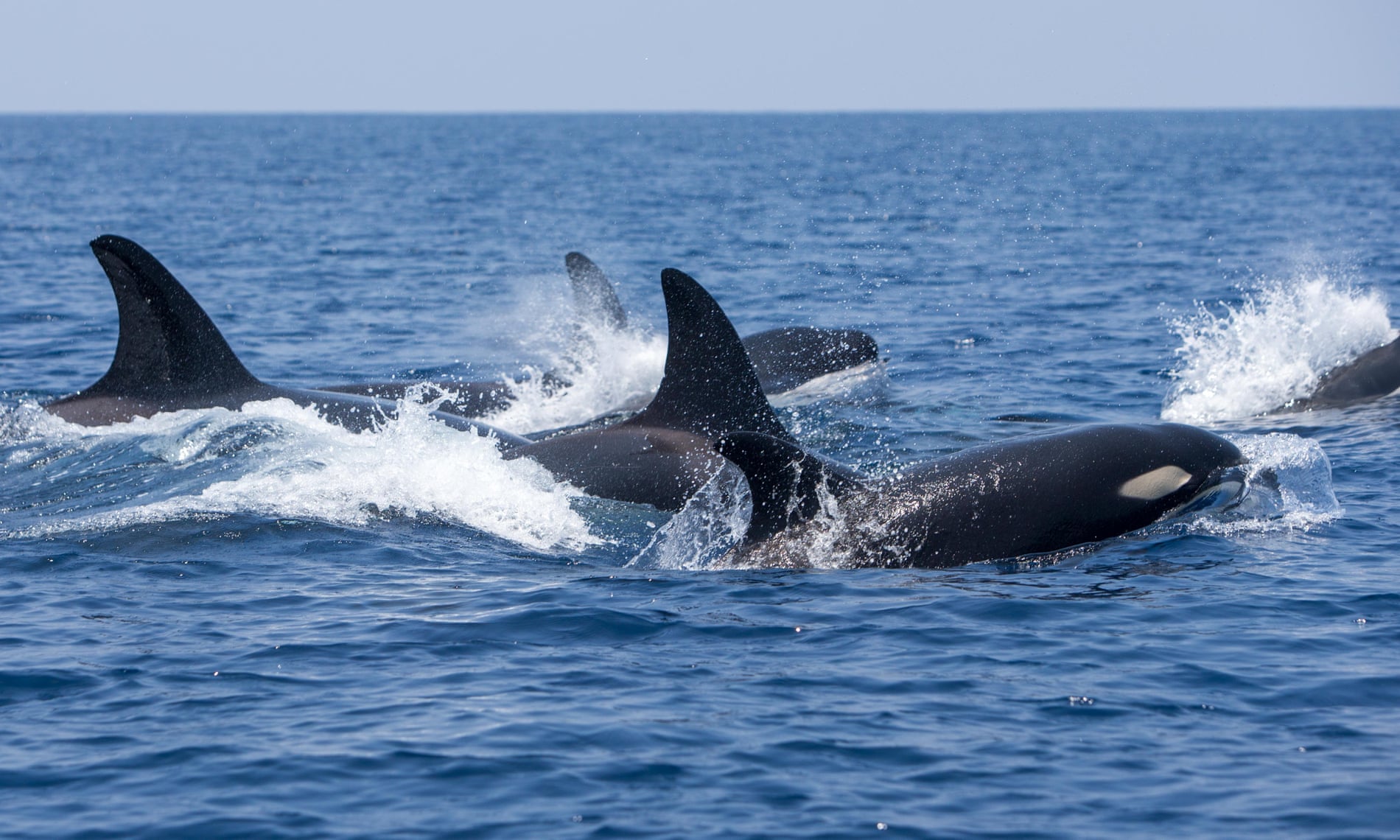 Read the Full Article Here
While observing sperm whales off the Sri Lankan coast, Philip Hoare came face to face with eight hunting orcas who had no fear of the 100-strong sperm whale pod ...