Orca, both Resident and Transient Bigg's have been spotted in a few different places. Transient Bigg's Killer Whales were seen following a group of Pacific White Sided Dolphins today up by Squamish. We've posted a news link under Links in the News. There are rumours of Northern Resident Killer Whales at the top of Johnstone Strait, but we don't have any specific reports to provide in our update. The huge group of Pacific White Sided Dolphins from a while ago have split into smaller groups, 80 to 200 in numbers, and seen in places from Squamish to Lund. We believe that some of the Unidentified Orca are Transient Bigg's either following or attempting to herd some of the Dolphins. It's great to get reports of those shy little Harbour Porpoise as well and look forward to hearing more from everyone. It's just about time for the Grey Whales to start up the coast as well as Humpback Whales to start showing up. Keep your eyes open and please remember to call or email your report in to us.
Susan MacKay, Whales and Dolphins BC

Call 1-877-323-9776 or Email your report.
Every sighting report is valuable
Have you seen a whale, dolphin or porpoise? 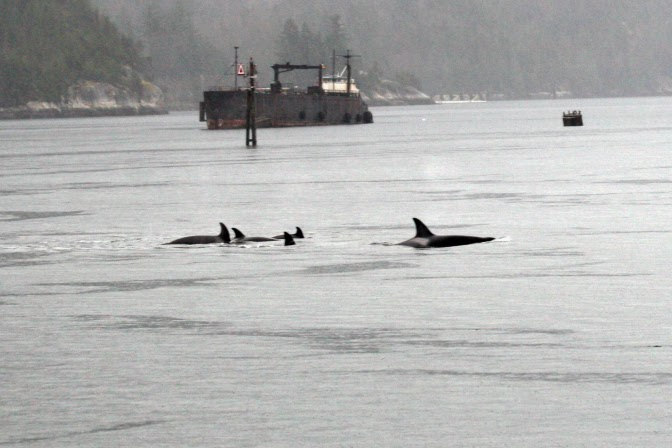 March 14:
I was in Nanaimo and I spotted 3 groups spread out over about 2 km for a total of 12 – 15 Orca. They were heading south east and were about 1 km. off Neck Point. Kind of funny as I am on my way to Sointula to hopefully get some photos of whales!
Geordie Harrower, Roberts Creek.

March 14:
2:30 pm: Orcas spotted, two groups, off Winchelsea, in front of schooner Cove Marina, near Nanoose Bay. One group had 6 and the other had 3, heading southbound towards Nanaimo.
Mike, Nanoose Bay

March 13:
9:30 am: There are Orca heading northbound, mid channel, off Cape Mudge Lighthouse, on Quadra Island. There are 3 or 4 of them. Reported by a fishing guide.
Jack Springer, Campbell River Whale Watching.

March 9:
11:50 am: There are half a dozen or so Orca at the Subtle Islands, which are between Cortes and Quadra Islands. (watching from shore on Quadra)
Jared Towers, Dept. Fisheries 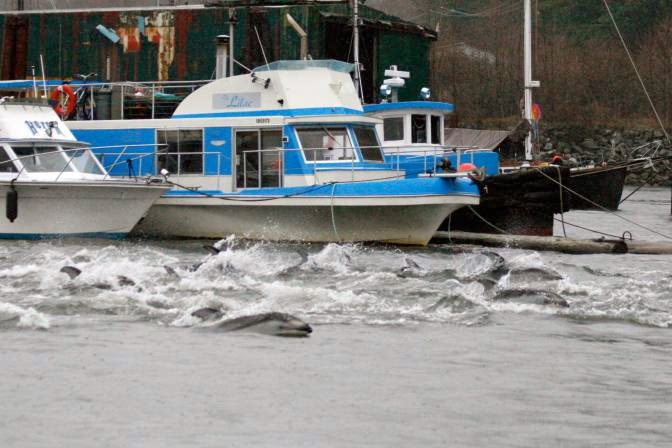 March 15: 11:30 am
Hundreds of Pacific White Sided Dolphins followed by Transient Bigg's Killer Whales in Squamish. Photo by Mandy Jensen
Global TV report link in Links in the News below.

March 11:
7:45 am: Large pod of Pacific White Sided Dolphins are heading up through the Ragged Islands (Copeland Islands) off Lund. I missed them, but Murray and the crew saw them, no photos.
Gordie Coles, Lund / Savary Island

March 10:
4:30 pm: 200 or so Pacific White Sided Dolphins passed quickly by Beach Gardens. They should be in front of the viewpoint soon.
Andrew Bryant, Powell River

March 10:
4:45 pm With Andrew still on the phone, I looked out to see the 200 or so PWS Dolphins in front of Powell River motoring fast northward.
5:30 pm: After speeding past Westview, the PWS Dolphins stopped briefly to forage at the Powell River Mill, and then continued more slowly towards Mystery Reef off Savary Island.
6:20pm: I can still see the dolphins, and they are spread out between Dinner Rock and Savary Island's Mace Point. There's a couple of hundred for sure.
Susan MacKay, Whales and Dolphins BC.

March 10:
6:15 pm: There are 70 to 80 Pacific White Sided Dolphins off Atrevida Reef northbound. They are travelling in a vee line, like geese, heading towards Lund.
Kim Lisberg (sp?), Powell River

March 10:
7:00 pm: The dolphins are headed towards Major Rock. They are too far away from Savary to get a photo.
Rick Thaddeus, Savary Island 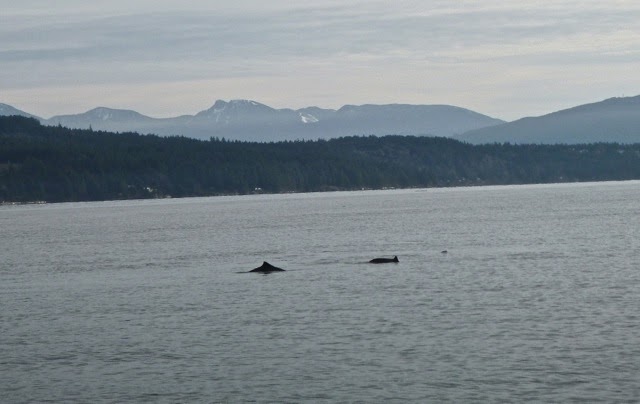 March 14:
5 pm: I went out on my boat yesterday at 5 pm with the sole intention of watching these porpoise. I stopped the boat and drifted and waited. Sure enough they were there. I saw 2 groups of about 5 or 6 again right offshore of Whitecliff park in W Van. After watching them carefully for an hour I now almost certainly believe them to be harbour porpoise, not Dall. They came within about 30' of the boat. I'll keep u posted!
Earl Paxton, West Vancouver

March 12:
6:30 pm: I saw two groups of Dall's (?) porpoise yesterday off Whitecliff Park, West Vancouver, around 18:30 hours. I travel between Fisherman's Cove in West Van to Gambier Island 2-3 times a week in my 19' boat and see these guys every other trip. Yesterday there were 2 in one group (100' offshore from the park lookout), or at least that's all we saw. The other group, about 5 or 6, was about 1/2 km. further south east. Although I've only ever seen 3 before on any given day, I was excited to see so many at once. Unfortunately I was in a hurry so couldn't stop and watch. They are in the same area every time. They seem quite elusive and unfortunately tend to move away from the boat as I pass through. (This is very consistent with Harbour Porpoise activity rather than Dall's Porpoise - SM)
Earl Paxton, West Vancouver.

March 9:
1 pm Single large blow seen three times North-West between Rebecca Rocks and Harwood off Powell River. I watched for quite a while and did not see a back or tail flukes. I thought I had seen a blow earlier also, but put it down to sea lions. This second set of blows was just too much to ignore. It may seem silly to post this report, but we are attempting to track animals and this would give some indication of movement if and when a more definitive sighting is reported.
Susan MacKay, Whales and Dolphins BC

LINKS IN THE NEWS

The Canadian Navy has been cleared of blame in the 2012 death of a baby southern resident killer whale, but several experts have questioned the verdict and have asked for the investigation to be re-opened. The link to that story is below:
http://www.vancouversun.com/technology/Baby+killer+whale+death+investigation+flawed+experts/9600068/story.html

One animal rescued, but hundreds more needing help! The Vancouver Aquarium's Rescue Team has freed a Sea Lion whose neck was stuck in plastic packing material but estimate that there are hundreds more animals similarly trapped. Our shorelines are littered with debris that is harmful to fish, mammals and birds. Here is the full story on the rescue:
http://bc.ctvnews.ca/entangled-sea-lion-rescued-but-100s-more-animals-potentially-snared-1.1726622

Search and Rescue personnel from West Vancouver were treated to an amazing display of dolphin agility as they performed their routine training exercises out in Howe Sound. Here are some links to that story:
http://www.nsnews.com/news/video-hundreds-of-dolphins-play-in-west-vancouver-search-and-rescue-boat-wake-1.899381

Thanks very much to Michael Stewart, Powell River who sent us this link to some truly amazing video of Orca getting up very close and personal with a speed boat in the Pacific Ocean! We had posted a shorter version of this a while back, but thought this longer version was worth the link.
https://www.facebook.com/photo.php?v=10151690809714364

Japan has finally admitted that a percentage of the funds intended for tsunami victims and reconstruction have been diverted to fund their whaling fleet:
http://usatoday30.usatoday.com/news/world/story/2011-12-08/japan-whaling-tsunami/51744710/1
Second link regarding Japan's misuse of earthquake relief funds:
http://www.seashepherd.org/news-and-media/2011/12/19/international-reaction-to-japans-misuse-of-earthquake-relief-funds-1298