Orca and Dolphins in Squamish photos, Gray & Humpback Whales, and many Links in the News

Huge flurry of activity with the meat eating Transient Bigg's Killer Whales chasing Pacific White Sided Dolphins into Howe Sound and near Squamish. They did capture at least one – see photos and links in the news below. There are some other Orca reports that may be Transient Bigg's sneaking past at dusk. Gray Whales are arriving back to the West Coast of Vancouver Island as are some Humpbacks, all probably working their way to their Summer feeding grounds.
Rumours (no reports received directly) of some fish eating Northern Resident Orca being spotted near the Great Bear Rainforest as well as at least one Humpback Whale near the top of Johnstone Strait. There are many other Links in the News in this report covering a Humpback entanglement, sonar and whales, Species at Risk Act, stranded Dolphins and more.
Lynne has been helping compile all the reports for a while now and it's overdue that her name is added properly.
Susan MacKay & Lynne Cracknell, Whales and Dolphins BC

Call 1-877-323-9776 or Emailyour report.
Every sighting report is valuable
Have you seen a whale, dolphin or porpoise? 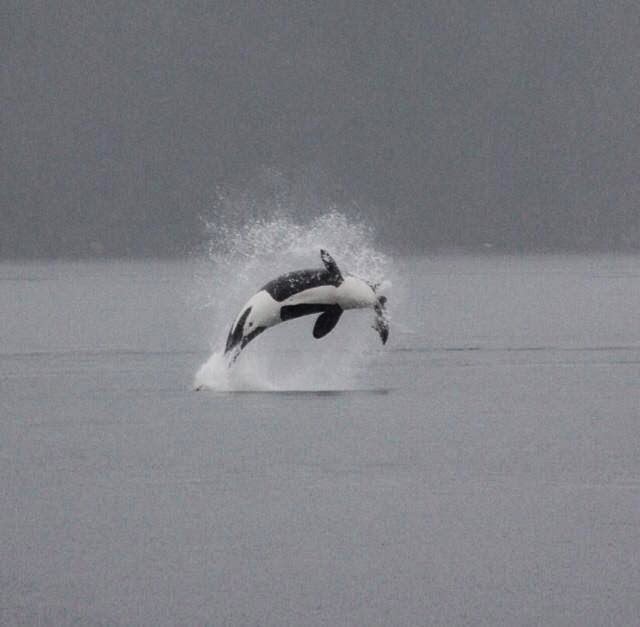 March 18:
7:50 pm Seven Orcas possibly Biggs headed North just off the kelp bed by Hidden Harbour, Campbell River, at 7:50 pm. They were moving fast. We saw 2 large dorsals and 2 calves. The seals that usually hang around here were gone for a bit and just came back yesterday. Jeanne, Campbell River

(These may have been some of the same Orca that had been in Squamish. Based on the photos I've seen, I believe the T60's plus others, possibly T123's, were there and were rumoured around Blackfish Sound March 19th – Susan MacKay)

March 18:
5:15 pm: Five whales were seen heading north slowly about 100 yards offshore off Schooner Cove BC. There was one large male, two females (I believe) with small dorsals. One calf. One smaller male, larger dorsal than the two whales that had the calf between them.
We have had two other sightings in the past month with killer whales southbound.
We have had more sightings in the last two months than the past five years combined, along with more sea lions, herring balls with bald eagles landing in the water, floating for ten to twenty seconds then lifting off. The water in front of our home in Schooner Cove (near Nanoose Bay) seems to be more active this winter/spring.
Robert Wigmore, Schooner Cove. 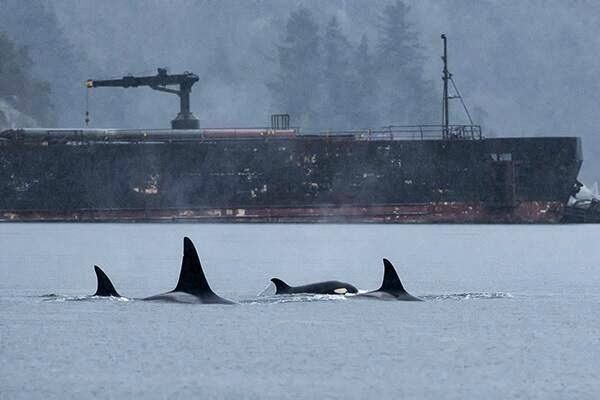 March 19:
Day: Lovely sunny day, but windy and cold in the wind. Not too rough but only two Gray Whales in about the same area as yesterday. (see report below) Hope to get out on the outside tomorrow.
Don McBain, North Vancouver

March 18:
12 pm - 4:30 pm: The Grays ARE in Barkley Sound! Got into Ucluelet at 11:00 am and was out at 12:00 with Jamie's Whaling Station. We saw three Gray Whales off the north side of Forbes Island, lots of sea lions, and maybe 100 eagles were in and out of the trees on the Island, going after the herring. I haven't seen that many eagles in one spot for years. On the way back in we came across a Humpback also! More tomorrow, I hope, as I will be going out at noon again.
Don McBain, North Vancouver 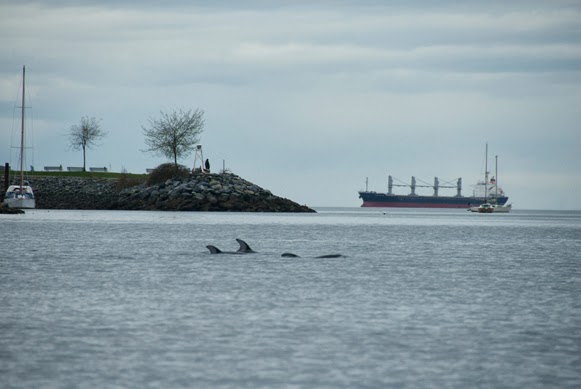 March 16:
12:00 pm: Pacific White Sided Dolphins in False Creek today! I have been watching 3 small pods of PWS dolphins from noon until 3 pm this afternoon. They travelled back and forth from English Bay Beach to beneath the Burrard Street bridge, mostly just hanging round the foot of Jervis Street. I estimate about 20 – 30 in the 2 pods that came in and about the same in a 3rd pod that seemed to remain about 500 metres out towards the buoys. They came to within 30' of the beach. VERY cool to see them in the city. Lots of spectators enjoying the rare sight. I'll send some pics as soon as I download off my camera.
Earl Paxton, West Vancouver.

March 16:
1:00 pm: Hello, I was walking around Vanier Park today March 16 around 1:00 pm and watched 4-6 either porpoise or dolphins swimming into False Creek and then what appeared to be the same group coming out again. As I could not distinguish between either dolphin or porpoise cannot say which it was but lots of other spectators saw them.
They were too far away for me to determine the dorsals but they appeared “silverish” and were leaping so I believe they must have been the Pacific White Sided Dolphins. Quite a thrill.
Carol Attenborrow, Vancouver, BC


March 10: (rec'd 15th)
6:45 pm – 7:30 ish We saw the (PWS) dolphins as well on March 10th,; jumped in our boat and they were no longer in the V as our friends down at Atrevida had stated, but in a long drawn out line, went on the West side of Major Rock and then veered northwards as if heading towards Mary Point (Cortez Island). I got a few shots (none submitted) along with many gulls and cormorants in the sunset sky. Gorgeous but cold!
Christine Hollmann, Terracentric Adventures, Lund. 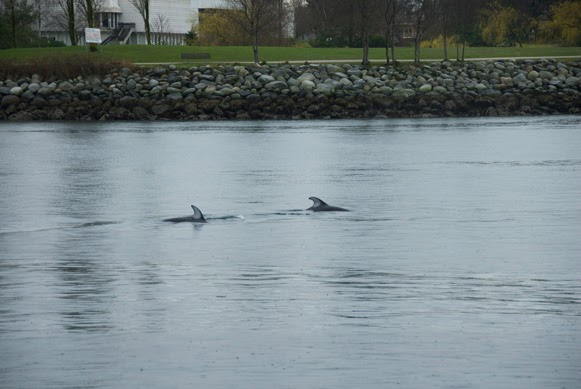 LINKS IN THE NEWS


This has been a very exciting week with lots of Dolphins turning up in numbers in places where they are not often seen, and quite often with Orcas in close pursuit. Lots of sightings offshore in Vancouver, and also in the Squamish area. We even made the National News! There are a couple of different links to these stories posted below:

Brenda Petersen's article on the effects of Sonar on Whales:
http://www.huffingtonpost.com/brenda-peterson/stop-us-navys-war-on-whal_b_4959028.html

On the East Coast some unlucky Dolphins became trapped in the ice and came to a tragic end. Link to that story here:
http://www.ctvnews.ca/sci-tech/dolphins-die-after-they-get-trapped-in-ice-off-southwestern-newfoundland-1.1732171

Article and commentary on Species at Risk, Humpback Whales and Enbridge by Caitlin Vernon, the campaigns director for Sierra Club.
http://www.straight.com/news/607561/caitlyn-vernon-whale-songs-and-science-risk-bc

California’s Orca Welfare and Safety Act, introduced last Friday by state Assembly member Richard Bloom, D–Santa Monica, has sent shock waves throughout the media and the captive-marine-mammal industry. The bill would make it illegal to “hold in captivity, or use, a wild-caught or captive-bred orca for performance or entertainment purposes.” It also would ban artificial insemination of captive killer whales and block the import of orcas or orca semen.
This article offers possible outcomes for the 10 whales that are in captivity at SeaWorld. Very thought provoking and well worth the read no matter what side of the fence you're on:
http://www.takepart.com/article/2014/03/11/saving-seaworld10-california-bans-orcas-captivity-richard-bloom-killer-whales?cmpid=tpanimals-eml-2014-3-15-seaworld10 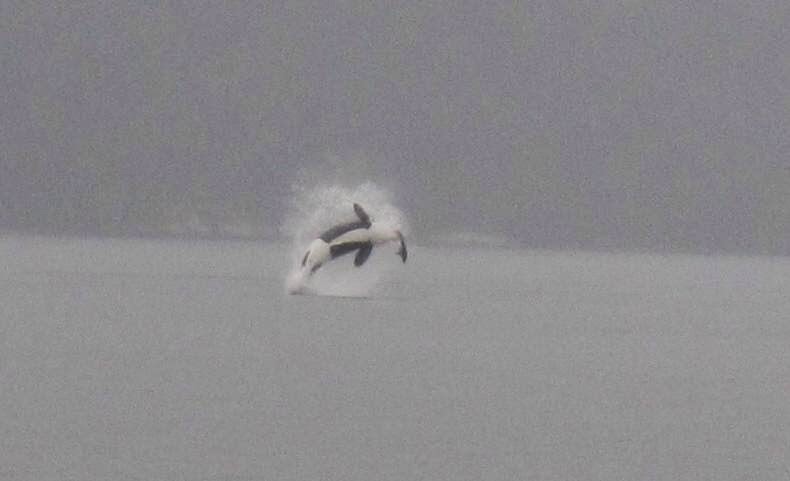 Have you seen a whale, dolphin or porpoise?
Call 1-877-323-9776 or Email your report.
Every sighting report is valuable!