Northern Resident (fish eating) Killer Whales finally made their way into the upper Johnstone Strait today. There's hopes of seeing them come down the Strait into our area. Transient (meat eating) Orca also now called Bigg's Killer Whales appear to have spread out – somewhere, but some have shown up in and near the US reported by Orca Network. Their sightings are random complete with disappearing acts; wait to see them since they're coming your way, and nothing. They are the masters. Sightings reports of Humpback Whales, Pacific White Sided Dolphins and a few Harbour Porpoise, nice to see them showing up again, round out the Cetacean sightings reports. There are a couple of submitted video links below.
Susan MacKay, Whales and Dolphins BC 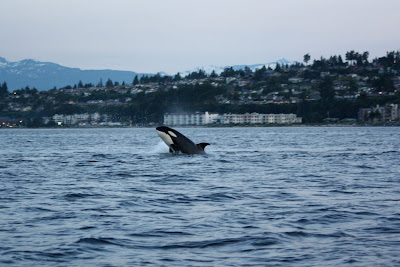 July 8:
Hi there We are in Hospital Bay, Pender Harbour. We have just seen a Mum and baby orca coming into the harbour passed Indian islands. How special was that? Do we need to report it anywhere else? ( we are from Alberta and have to report bear sightings) do they often come into harbours?
Thanks for your website
Cindy Luntley

July 8:
Hi Susan, We were boating off Beach Gardens (Powell River) and saw Orca about half way between our shore and Texada. They were being closely followed by a Coast Guard boat. The Orca were headed north, one large male and several others, looked like there were a couple of calves. We saw them between 1:30 and 2 pm. Sorry you missed them. Our 9 year old grandson was quite excited as he was the one who got the humpback photo in Mexico. Not sure we got any pics, will download them later today.
The ones you called about the other night we don’t think came this far southeast.
Michael Stewart, South Powell River


July 7:
Sailed around 8 Orcas yesterday morning from 10:30 am until 12 pm. Sailed with them off Pender Harbour to the north tip of Thormanby. There was one large male some females and definitely a few calfs. Saw one orca breach.
Carolyn Slater

July 6: (received late)
Hi Susan, I was so lucky last night, (6th) as always I hopped in the car to photograph the orcas, (in front of Campbell River) but this time I also ended up hopping on a boat at the last minute, with some very kind and generous strangers, haha!! There appeared to be two groups of orcas, each maybe 5-7 in number. Or maybe one large pod, but there was often a good distance between each group (100-200 yards), also I believe we saw 2 bulls (maybe 3?)- but I'm not sure. I think we were watching their playful and proud behavior after a kill. I'm speculating, but with the binoculars I did see what looked to be hunting and circling for some time, later followed by breaches, pec and tail slaps, lobtailing and spy hops galore!!! This is actually my first time seeing ANY of these behaviors, and they were all combined in one night! What a treat to witness!! I've attached the one photo worthy of sending to you for now- I'm a beginner photographer, and so the low lighting conditions combined with all of my excitement resulted in only a few keepers :) I'll send some ID photos to you another time if you're interested... but for now, here's my FAV!!! Happy Weekend! Talk soon! :)
PS: I forgot to share their direction of travel- very slowly north through discovery passage with a few direction changes while playing and jumping around! :)
Tara Bladon, Campbell River 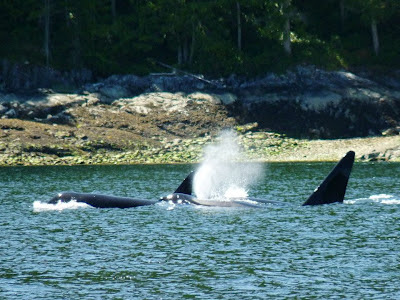 July 8:
7:30 am Humpback Whale out in front of Willow Point. No direction – from fishing guide report. 8:12 am The Humpback is now in front of Quathiaski Cove bucking tide.
Scotty, Painter's Lodge 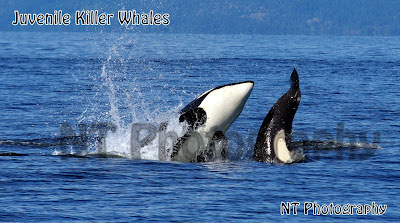 July 9:
1:37 pm 10 or so Harbour Porpoise spread out foraging mid channel between Hernando and Copeland Islands. Joss, Eagle Eye Adventures also reported that in his travels, he saw a couple of Harbour Porpoise by Sliammon Creek, Powell River. No time given for sighting.
Susan MacKay, Whales and Dolphins BC

Link with Pacific White Sided Dolphins wake riding by Savary Island on July 7th – A quick reminder to all boaters: if the Dolphins want to come to play by your boat, be very careful not to make any sudden turns or stops. Never rush them or drive into the middle of the group. They may be fast, but can't always get out of your way fast enough and have been known to get hurt. http://www.youtube.com/watch?v=PAggBUsE8V0
Gordie Coles, Savary Island / Lund

Here is the link to the mother and baby River Otter (these are the common Otters we see in our inside waters – SM) sighting on June 30 in Myrtle Creek, Powell River. http://youtu.be/8xQCT_RfJ84
Holly Roy, Traff Road, Powell River

Nice Comment on July 8:
Hi there. Just wanted to let you know how much I enjoy receiving your posts! We just moved to Powell River (Myrtle Rocks area) from the Fraser Valley. I've been back and forth on the ferry dozens of times and have yet to see any whales, dolphins etc. but it's not for lack of trying lol. My family knows it's on my bucket list, and now that we've moved here we're always watching when we can (don't live right on the water). I figure sooner or later it's gotta happen lol! Anyways, thank you so much for all your hard work putting this together. You really do a super job at it and I really enjoy the emails, and pictures. Thank you!!!
Ann Mailhot, Powell River, BC