Humpback Whales Still Around, Orca and Dolphins Too

Pacific White Sided Dolphins are the majority of this report as they travel in larger groups leaping and splashing. Other Whales have been slipping by as they do long dives and people miss seeing them or only get a brief glimpse. They are still around throughout our waters though, and sometimes it's just luck in spotting them. Even just after our publication cut-off time, there were some Orca southbound in front of Powell River. I spotted them surfacing only a few times, then they seemed to vanish.

We'd like to remind you that every report is valuable. You may see one or two whales and someone may see more. You may not even be sure of which species of whale you're seeing, but the report is still useful, and frequently we can help you figure out the species. This information helps us in establishing their patterns and patterns of their food sources they are following. So keep your eyes open, and please report your sighting.
Susan MacKay, Wild Ocean Whale Society

Nominations:
Wild Ocean Whale Society has been nominated again this year in the Not-For-Profit category of the 2017 Annual Business Awards for going above and beyond in all aspects of business. Thank you all for the nomination. Winners will be announced at a gala event held by the Powell River Chamber of Commerce on February 4, 2017

Real Time Monitoring Station Update:
We hope to get a few photos of the progress in our next issue.

Our team of Volunteers continue to do a great job in making sure all your reports are mapped and published regularly. Would you like to join us?
Review our current Volunteer Job Postings
Note to Safari browser users:
Apple software upgrades may prevent images from displaying on this site. To resolve the problem, please clear your Safari browser cache: On a Mac this is in Safari preferences. On iPad and iPhones, use the Settings app, Safari, Clear History and Website Data.

Robin Evans, Heriot Bay, BC
Mon Jan 30 2017
14:00 • 5-6 Orca moving slowly, heading east off Sandy Cove in West Vancouver, Burrard Inlet. I am not a whale expert. A couple of the dorsal fins were very large suggesting males and there were a couple of young ones in the group. They were gently rising out of the water then submerging. Of the three freighter moorage spots off West Vancouver, they were between the middle and far east one. ▫ Observed from Shore

Maureen Barratt, visiting from Alberta
Sat Jan 28 2017
15:00 • 5-10 Orca moving quickly, heading south-west between Whytecliff Park and Passage Island, Queen Charlotte Channel. Was sitting on a bench at Whytecliff park in West Vancouver,looking out at Passage Island when all of a sudden a big male dorsal fin appears. There were two males and five-seven females. One of the big males was by itsself and came up for air really close to the Whytecliff Park Islet. Some of them swam around Bird Islet and they were all heading towards Passage Island. Lost sight of them as they went around Passage Island. Not sure if they were Transients or the Southern Residents. ▫ Observed from Shore

Eric Green, Powell River CCG
Fri Jan 20 2017
11:40 • 1 Humpback Whales foraging, off Story Point near Bella Bella, Seaforth Channel. I viewed this whale feeding near Story Point from my boat over a 2 hr period and then again before sunset from the western shore of Lama Pass. It was feeding close to shore and further out. There were thousands of water birds in the area indicating a large school of herring. ▫ From Power or Sail Boat Read the Full Article Here
That’s a brand-new sign – in San Simeon, California – along The Whale Trail, the shore-based network of whale-watching spots established by the West Seattle-based advocacy group of the same name. The photo is from TWT executive director Donna Sandstrom, who is in California to launch six new TWT sites, including that one. And this comes as her group celebrates a new grant announced this week by a national org....

Why Whales Leap Into the Air
Hakai Magazine

Read the Full Article Here
After hundreds of hours of observations, we now know it’s true: breaching humpback whales are yelling.
Just off the easternmost tip of Australia, a 36-tonne humpback whale launches itself out of the water, twists midair, and crashes back into the sea. Breaching is among nature’s grandest spectacles—and one of nature’s grandest gestures. New research conducted by University of Queensland marine biologist Ailbhe S. Kavanagh confirms what many cetacean biologists have long suspected: breaching is a whale’s way of saying hello.

Because the ocean can be such a murky place, many marine animals have turned to sound to communicate. Sound travels far more efficiently in water than light does. Humpback whales (Megaptera novaeangliae) are among the best-known ocean vocalists. While the haunting songs of males have been well studied, the “social sounds,” produced by humpback males, females, and calves alike, are less understood. These include so ...

Read the Full Article Here
Porpoises are members of the scientific order Cetacea and are related to dolphins, but the two animals are different species. They both have sleek bodies and large flippers. Both are considered brainy creatures and they both have a melon, a structure in the forehead that they use to produce sound waves for navigating their watery homes.

However, porpoises and dolphins differ in several ways. For example, porpoises don't have elongated beaks like dolphins. Also, porpoises have triangular dorsal fins, while dolphins have curved or hook-shaped fins. The exception are finless porpoises. They don't have fins at all. Do... Read the Full Article Here
While we may think of the underwater world as relatively tranquil, it is dominated by sound. Most famous of all those sounds are the melodic “songs” of humpback whales, which, after being popularized on an eponymous record album in 1970, proved a catalyst for the early “Save the Whales” movement. The late astronomer Carl Sagan considered humpbacks’ songs so beautiful that he included them on the “Sounds of Earth” recordings that, even now, are heading far into space onboard the Voyager spacecrafts. And while no other whale song has traveled so far, the vocalizations of other whale species can travel great distances: the low, powerful rumblings of a blue whale, for example, have been picked up on hydrophones 700 miles away.

The first time I heard a blue whale vocalization was when scientist Roger Payne played a recording at a conference in Monterey, Calif., in the late 1980s. Normally, these rumblings are at a frequency that is too deep for the human ear or, at best, at the very fringes of a person’s hearing, but Payne had sped up his recording so that it was easily audible. Even in a form broadly equivalent to Plácido Domingo impersonating Mickey Mouse ...

When Whales and Sails Collide
Sailing World
Read the Full Article Here
Collisions with objects at sea are becoming more and more common for ocean going sailors, but data on incidents involving marine mammals is often spare....
In May 2012, CAMPER helmsman Roberto ‘Chuny’ Bermudez found himself nearly face to face with a whale in the middle of the North Atlantic Ocean. In a pretty extraordinary video from a rainy day on the Miami to Lisbon leg of the 2011-2012 Volvo Ocean Race, you see Bermudez swing the boat, which had been hurtling through the ocean at over 20 knots, into the wind and just narrowly avoid what would have been a catastrophic collision with a marine mammal.
“It would have been a bad day for both the whale and for us,” said Media Crew Member Hamish Hooper afterwards. “With reflexes like a cat [Bermudez] narrowly missed what would have been the equivalent of a runaway freight train colliding with a truck.” 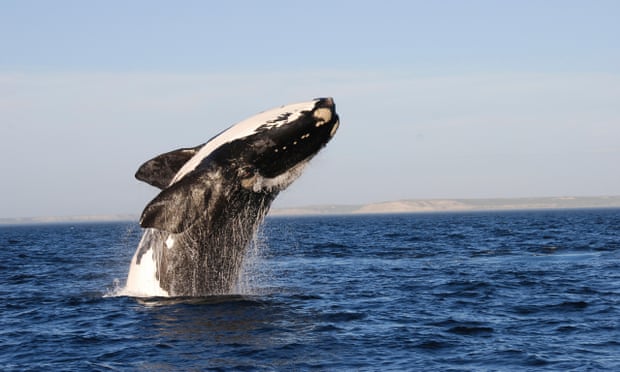 Read the Full Article Here
“There are only a few thousand southern right whales left on the planet,” said the project’s leader, geneticist Jennifer Jackson, of the British Antarctic Survey, Cambridge. “We need to find out what is killing them and we think their sub-Antarctic feeding ground holds the answer.”

Southern right whales (Eubalaena australis) can grow to 18 metres and weigh up to 80 tonnes. They get their name for being the right whale for hunters to pursue, added Jackson. “They swim slowly, float when dead, and yield a great deal of oil,” she said. “They were perfect targets for whalers.”

Back in 2012, Humans were on Display for a Grey Whale and Calf
YouTube
Read the Full Article Here
Mother Whale and Calf with people on whale watching trip. Very cool to see the Momma raising her Baby to show it the funny looking humans! Like a revers Zoo, were the people out to see the Whales, or was the Momma Whale teaching her baby about humans? The big momma Whale held her baby on her back to raise it high enough for the humans to pet it, and for it to get a good look at the humans. 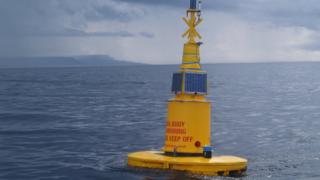 Read the Full Article Here
Scientists plan to eavesdrop on whales and dolphins as part of a new plan to protect sea mammals and marine environments.
Almost £6m has been set aside for the project which will be centred on the Irish and Scottish coasts.
It is being led by scientists from Northern Ireland's Agri-Food and Biosciences Institute (AFBI).
They are developing a network of marine monitoring devices.
The scientists will be able to record whale and dolphin chatter, allowing them to identify numbers and species in the water.
The technology will also enable them to assess whether noise from commercial fishing, or other marine industry affects them.