Fewer than usual Cetacean Sightings - But all Sightings are Good!

Short report today. The few Sightings reports include Orca, possible Humpback or Minke Whale and some Porpoise. There are a few links showing some Pacific White Sided Dolphins and Transient Bigg's Killer Whales in close proximity as well as Bryde's Whales and Basking Sharks. Lynne Cracknell is back in town, on stream and ready to type all your reports.
Susan MacKay, Whales and Dolphins BC

Have you seen a whale, dolphin or porpoise?
Call 1-877-323-9776 or Email your report.
Every sighting report is valuable 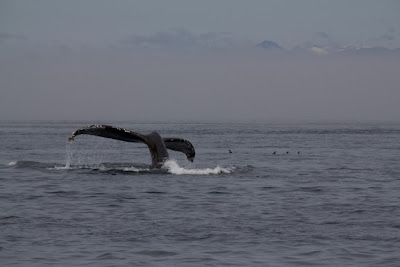 November 20:
6:20 pm With the radio on still as I finalize the Sightings Report, I suddenly hear that there are some Orca somewhere off of Denman / Hornby Island. The people talking were hoping that they'd take a sea lion or two. It's assumed that these are commercial fishermen.
Susan MacKay, Whales and Dolphins BC

November 18:
3:15 pm 3 Orcas with small fins sighted moving southbound by Davis Bay in Sechelt. Someone else said they had seen a big dorsal. There were lots of seals around at the time. The Orca we saw were a couple hundred yards off shore.
Danny Bakan, Roberts Creek, Sunshine Coast.

November 12:
5:00 pm There are several Orca northbound in front of the Campbell River Ferry Terminal. I saw four of them; there was one male and then three smaller fins. I just saw them surface once but it was getting dark. Don't know if there were any more.
Laura, Aboriginal Journeys Whales and Grizzly Bear Tours.

September 12 (rec'd Nov):
I saw these whales (see photo) while sitting on the Rebecca Spit on Quadra Island on Sept 12th. Can you tell me anything about them? Thanks. (These Orca tie in with the Transient Bigg's that were reported at that time - SM)
Linnea Hansen 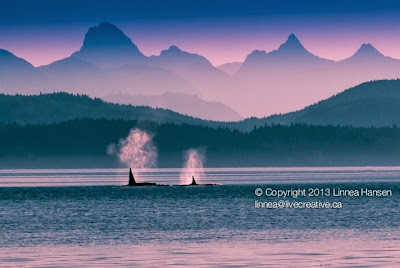 November 13:
8:09 am Possible Humpback or might be a Minke whale northbound from Myrtle Rocks.
8:09 am, so too early to call you. Just been watching a lone orca slowly going up past Myrtle Rocks towards Beach Gardens. I wasn’t sure it was an orca as it has such a small curved fin, but it is much bigger than a dolphin. It’s definitely not the same Humpback from the other day; for sure. Hope you can see it shortly.
Holly Roy, Powell River

8:45 am Humpback or Minke Whale just passed by Powell River. Looked like it could be a Humpback, but can't rule out Minke Whale. It surfaced a couple of times and was definitely quickly on the move Northbound. Kept looking, but didn't see it again.
Susan MacKay, Whales and Dolphins BC

November 13:
8:45 am Large, lone whale just south of the Powell River ferry terminal. It may be Crescent BCX1258? (without confirmation, it is very difficult to tell which whale it might be - SM)
Shirley Randall, Powell River

November 10:
11:30 am Possible Humpback whale southbound in Grenville Channel. That's located in the Inside Passage just south of Prince Rupert. When the captain of the ferry announced there was a whale off the starboard side, everyone went to look. It had a huge blow and a small dorsal.
Cameron Brant, Morristown, BC

November 12:
I travel by boat from Fishermans Cove in West Vancouver to Gambier Island daily and quite often see dolphins right off Whytecliff Park. I saw 3 small black or dark grey ones today. I quite often see the larger pods of Pacific White Sided dolphins in Howe Sound between Bowen Island and Gambier Island, but these ones seem quite a bit smaller and have a smaller dorsal fin. They don’t come very high out of the water either and therefor are very difficult to get a good look at. I love seeing the dolphins and so am always scanning my eyes across the water in hope to see them. I am very curious as what the type of dolphins are that I am seeing by Whytecliff. I’ve seen them 3 out of the last 6 working days while passing through. Your help would be much appreciated. Thanks. (Based on the description, they could have been Dall's or Harbour Porpoise. There is information available to help identify them on the Whales and Dolphins BC main website - SM)
Earl Paxton, West Vancouver 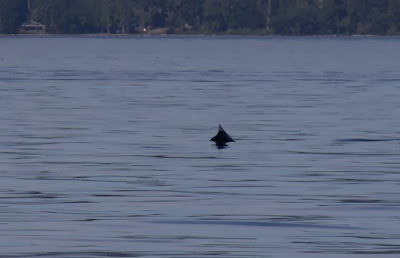 Dolphins and Transient Orcas - November 10, 2013 just below Victoria, BC:
https://www.youtube.com/watch?v=yl6dUZ83AU0