Dolphins all over, some Orca pop up while the others disappear, and a rare, since last year, Harbour Porpoise sighting. A few links in the news below also.
Have you seen a whale, dolphin or porpoise?
Call 1-877-323-9776 or email your report.
Every sighting report is valuable!
Susan MacKay, Whales and Dolphins BC

April 5:
An Anonymous 'comment' posted to the Sightings report that this Orca was seen near Gambier Island – no other details I'm afraid, but the report and photo were
sent in today at 2:20 pm - SM.
Anonymous 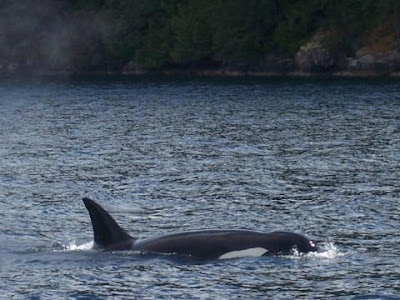 Orca near Gambier Island
sent in April 5, 2013
By Anonymous

April 2:
I think there are 4 whale in front of hauls. Hook fin. (no other details I'm afraid – I believe it may have been the Hulks, the old war ship breakwater off the Powell River mill, rather than 'hauls'.- SM)
Marion Blank 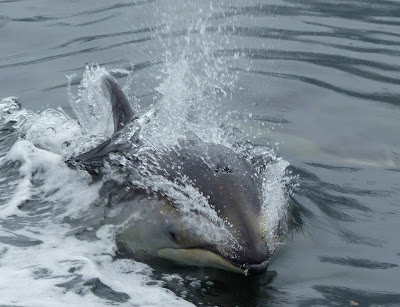 April 3:
11:20 am Approx. 12 PWS Dolphins off Harwood Island out in front of Powell River. They're heading towards Vivian Rocks and out into the Strait.
Susan MacKay, Whales and Dolphins BC

April 1:
9:50 am While kayaking today in Jervis Inlet crossing between Egmont Point and Goliath Bay, we were mesmerized by a Line dance of ~100 Pacific White Sided Dolphins working their way across the channel, from West to East, with South most individuals off Captain Island in a line stretching North up to Saumarez Bluff. They worked their way to the Eastern shore and then proceeded North, finally appearing to close up into a large ring off in the distance. Quite the show.
Eric Schwartz

March 31: (rec'd April 2)
Sorry for the late posting; Early Saturday (Mar 31) morning, we were treated to a sight we don't often see in Sechelt Inlet. At the entrance to Narrow Inlet, we were surrounded by a large pod of pacific white sided dolphins. They were spread across the width of the inlet and travelling towards Skookumchuck Narrows. They're hard to count, but we estimate a group close to 100. It's a beautiful sight to see 4 dolphins jumping simultaneously. Beats hopping Easter bunnies any day!
Here is our attempt at trying to capture extremely fast moving targets.
Joan Bech, Roberts Creek 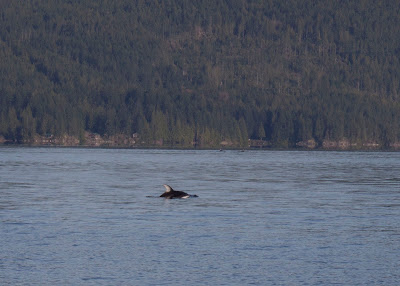 April 3:
11:27 am 2 or 3 Harbour Porpoise just out from the Powell River Viewpoint angling towards Willingdon Beach. Nice to finally see a couple around again.
Susan MacKay, Whales and Dolphins BC

Links in the News

The necropsy of the dead Humpback Whale found in a fish farm net by Tofino has been started:
http://www.cbc.ca/news/canada/british-columbia/story/2013/03/29/bc-dead-whale-fish-farm.html
While the bones have been retrieved for the Royal BC Museum in Victoria:
http://www.theprovince.com/travel/Huge+humpback+whale+skeleton+retrieved+Royal+Museum/8202331/story.html

Tourists have a whale of a time after 30-tonne mother and her curious calf pop up to say hello (and get a kiss for their troubles):
http://www.dailymail.co.uk/news/article-2300092/Tourists-whale-time-30-tonne-mother-curious-calf-pop-say-hello-kiss-troubles.html

The Whales and Dolphins BC toll free sighting report number:
1-877-323-9776
Please bear with the quirks and need to streamline the message. It sometimes goes to voicemail sooner than anticipated, before there's a chance to pick up, so please leave a message with your sightings information. The voicemail will be changed, but currently still answers as Susan MacKay.
Every Sightings report is important – keep looking – they are out there!