Finally some Sightings - Orca and Dolphins

Just when you think there will be another minimal report, some Whales and Dolphins pop up. Today we had Transient (Bigg's) Killer Whales, first reported off Savary / Lund this morning, and Pacific White Sided Dolphins in front of Powell River. Some very late reports also came in, but at least they were reported. A report from Hawaii too. Although I had hopes of the Southern Resident Orca who were seen Northbound by Victoria the other day, it was not to be – yet. They are due, every December in the Powell River to Comox area. Keep an eye out.
Susan MacKay, Whales and Dolphins BC 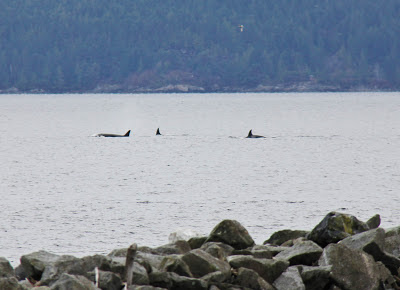 December 10:
11:57 am The 6 Orca suddenly appeared just between the Powell River ferry terminal and the Viewpoint heading South in quite a hurry. There was one male and one juvenile in the group. Perhaps they were in pursuit of the Dolphins, but no Dolphins were sighted other than the report below. With the skiff in the shop, I drove down to Beach Gardens to hopefully catch them on camera. They slowed right down by the marina stopping briefly as if to check something out. A sea lion quickly made a bee line to shore. I left them at 12:45 pm continuing South towards Myrtle Rocks doing longer dives and moving slower.
Susan MacKay, Whales and Dolphins BC 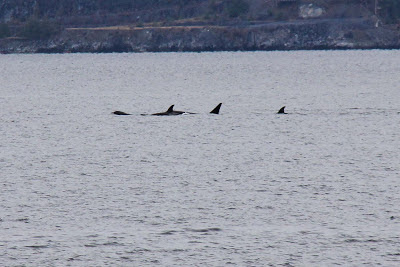 December 10:
12 pm Some Orca just popped up down by the viewpoint in Powell River. Just happened to look out and saw them.
Steve Grover, Powell River

October 19: (late report)
Shortly after 5 pm there was a large pod of around 20 Orca off the North-West side of Texada Island angling towards Comox. There were some splashes, tail lobs and breaches. Seen from the Powell River to Comox ferry.
Marc Salewski, Powell River 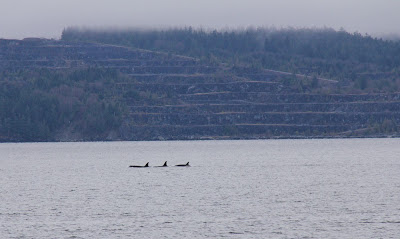 December 10:
Between 10 and 10:30 am Around 30 Pacific White Sided Dolphins were foraging close in to shore by Willingdon Beach. They were running back and forth.
Ted Douglas, Powell River

NOTE:
A reminder to all that there are many photos, reports and information available by clicking on the Archived Pages links. I am working on easier access to these older reports, but for now, it's a few clicks.

Win a Four Day Cruise for Two Draw
Draw date: March 16, 2013
Click on the above link for details.

For those of you who do not want to use PayPal, or have run into problems trying to Donate through PayPal, please contact me to make alternate arrangements and ensure your name gets into the draw.