Pacific White Sided Dolphins have been spotted along Georgia Strait including South of Powell River to Savary Island areas which have been devoid of any cetaceans for quite a while. Transient Orca grouped up in large numbers, a couple of Humpback and Dall's Porpoise Sightings and more sightings of the Grey Whales between Saltrey Bay and Earl's Cove.
Cetacean sightings reports were a bit hit and miss over the Canadian Thanksgiving Day long weekend. Reports came in mostly after the fact and covering the whole day, so these listings are not separated by species, but are posted by Day and grouped by report.
Susan MacKay, Whales and Dolphins BC 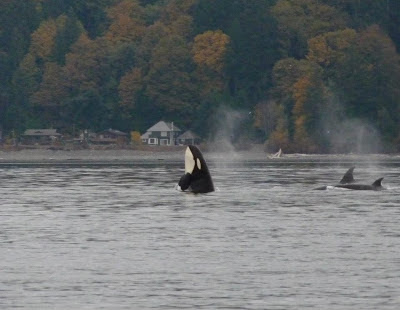 3:40 pm There are now three groups of Transient Orca. I have 13 of them, above Mitlenatch, there are another 5 or so closer towards Cape Mudge and another couple still South of Mitlenatch Island. Lots of breaching and splashing.
3:40 pm Report of 2 Humpback Whales by Kanish Bay too!
Jos Krijnen, Eagle Eye Adventures

3:50 pm 2 Harbour Porpoise Grant's Reef, off Savary Island foraging. At the same time, there were a couple of Dall's Porpoise heading towards Savary Island and som PWS Dolphins appeared to head towards Vancouver island northbound mid strait out from Grant's Reef.
5:30 pm A number (couldn't make out how many for sure) were leaping off the end of Mystery Reef, Savary Island. They were back and forth and I last saw them headed towards Lund.
Susan MacKay, Whales and Dolphins BC
5:11 pm Lots of Orca. Many groups just North of Shelter Point. By 5:30 pm they were almost to Cape Mudge Lighthouse now. There's over 20 of them! They went past Wai Kai Village mid-channel. One seal kill so far. Left them at Quathiaski Cove at 6 pm.
Garry Henkel, Aboriginal Journeys 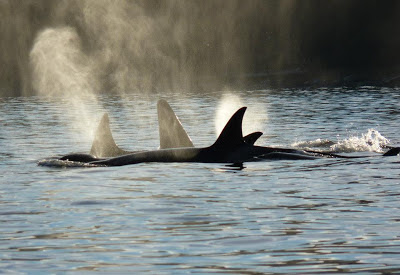 5:20 pm 8 or so PWS Dolphins off Powell River Viewpoint Southbound.
Susan MacKay, Whales and Dolphins BC

4:36 pm Simon is sitting right now off the bottom of Texada Island between Texada and Thormanby with 30+ Transient Orca! They're socializing and having a hoot. No general direction yet. Sounds like and amazing place to be! ID's so far: T101 / T102's, T100's, T124's, T90's, T30's plus others.
Nick Templeman

Day: This beautiful evening has a nice Humpback making shallow but vertical and rapid dives inshore of the Chatham pt. light, fluking every second dive- I presume it had found a school of something delicious. And a lovely herd of PWS Dolphins in the western mouth of Nodales channel. And many little groups of Dall's, in Bute, and eastern Nodales, and to the south by Horn pt.
Aaron Nagler, Sonora Resort
All Day Long till 4 pm Large group of PWS Dolphins off Finn Bay – Lund.
Geri Batchelor, Savary Island 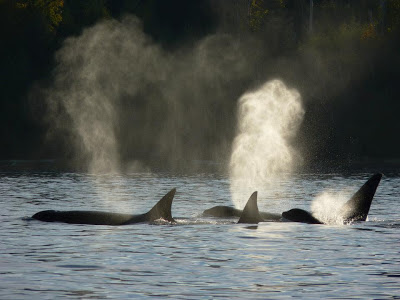 9:44 am Left the approx. 12 Transient Orca at Steep Island still Northbound and grouped together. There's about 15 PWS Dolphins right on my wake running from the Orca at Steep Island. The Orca had just kill a seal, so were busy.
Jos Krijnen, Eagle Eye Adventures

10 am: Gil took the ferry from Saltery Bay yesterday. Just past Captain’s Island the bridge pointed out a grey whale and a calf. Gil said he only saw the spouts, one large and one small, so couldn’t tell if it was a humpback or a grey, but there was a calf or much smaller whale there. That would have been around 10:00am.
Sherri Wretham, Powell River

12:30 pm Transient Orca update: Some coming out of Menzies Bay, northbound. Some just above Separation Head also Northbound. Third group...??
2:30 pm Got text that the Orca were at Brown's Bay Southbound, bucking the ebb. And around 5:45 pm they were in Duncan Bay Southbound.
Nick Templeman

6:30 pm I was recently at Pirates Cove Marine Park on DeCourcy Island (Oct 7th) and we saw a Humpback whale moving from the north to the south down Pylades Channel at approximately 630 pm. I took some (bad) photos, but was wondering a) if this information is useful to you and b) if you can identify the individual?
(Yes, very useful, thank you! The photos make it a bit difficult to Identify the whale, but from one distinct mark, I believe it is the one we call “Stripe” - must be headed South for the winter - SM)
Marina Elliott


October 6, 2012
(Rest of the 6th reports are in prior posting)
Rec'd on 7th:
I arrived home at 9 AM today after 3 weeks in Ireland and was thrilled to see about 60 dolphins swim quickly through Lang Bay heading West. What an amazing homecoming!
Michael Stewart, Powell River - South