Another Catch-up Sightings Report. Dolphins, Dolphins, and more Dolphins have been the main focus around the Powell River and surrounding areas. The Orca are all elsewhere, or at least no reports have come through from any local source. Humpback Whales should be around as they pass through and down the coast on their way to their mating grounds, but there's only a couple of reported sightings.
Susan MacKay, Whales and Dolphins BC 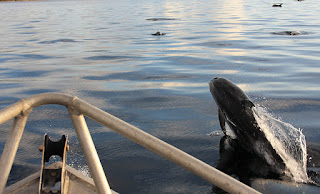 I believe this pod of dolphins (on November 3rd by Powell River) is the same pod that was seen near Horseshoe Bay last Tuesday, November 1st all around Howe Sound.
Patricia, Sechelt

5:50 pm 6 to 8 Pacific White Sided Dolphins headed South-West towards Texada. The odd ripple on the water caught my eye as I was preparing to head out the door. Of course I stopped to look through binoculars!
Susan MacKay, Whales and Dolphins BC

8:30 am No time to watch closely to confirm any numbers, but it looks like there are some Dolphins between Rebecca Rocks and Texada. SM

3:14 pm 100+ Pacific White Sided Dolphins between Harwood Island and Sliammon on the Mainland side leaping and foraging. The call came in from my neighbour Steve Grover (photos included) and since they were coming our way, off we went to check them out. Didn't take long to get out there and they co-operated by coming straight for us at their fast foraging splashing speed. There must have been a split around Harwood Island since there wound up being around 300+ Dolphins heading towards us and the Comox ferry which was coming in to Powell River. Their leaps and antics are wonderful! Another smile for the day. Throughout the next few hours, they came together and spread apart (huge spread) a couple of times, but all within sight of Powell River while some always stayed close to the skiff. We left them around 6 pm starting to group up towards Atrevida Reef, just North of Sliammon. My underwater camera showed scales from the fish they were munching on. There were also two Steller Sea Lions porpoising and playing while foraging with them.
Susan MacKay, Whales and Dolphins BC 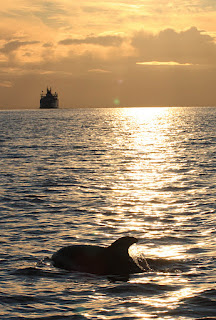 1:30 pm A few Dolphins in front of Westview, Powell River. (It's surprising how 100+ can be considered a few!) These ones were spread out, but there was a much larger group between Texada Island and Rebecca Rocks around 3 pm that these ones joined up with.
Susan MacKay, Whales and Dolphins BC

10:20 am 150+ Pacific White Sided Dolphins headed into Gowland Harbour, across from Campbell River. They were chasing feed. Left the Dolphins foraging in Menzies Bay at 11:15 am.
Garry Henkel, Aboriginal Journeys

9 am Around 600 Pacific White Sided Dolphins inbound towards Powell River between Harwood Island and Rebecca Rocks. Some turned and went out towards the West side of Texada. Around 300 of them continued in towards Powell River and stayed for most of the day. Unfortunately work came before Dolphins today.
Susan MacKay, Whales and Dolphins BC

8:30 am I'm hearing tugs and tows talk on the radio barely within radio range talking about the Dolphins “jumping all over the place”. Unfortunately, they couldn't hear me and I never heard exactly where they were. SM

8:40 am Two large blows by Rebecca Rocks – close to Dolphins, but heading away from them. Again, no time to watch for long, so never saw any tail flukes. SM 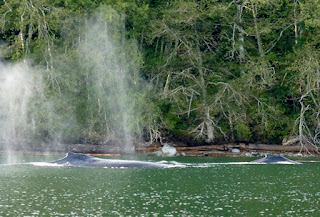 Identification note: I am almost certain that these are BCX1251 aka "Orion" and BCX1258 Crescent. From Jackie at Marine Education and Research Society

5 pm Another couple of tugs with tows talking on the radio about at least one Humpback Whale by Chatham Point, the bottom of Johnstone Strait.
Susan MacKay, Whales and Dolphins BC

A friend of ours who lives on Amour road said he saw a mother humpback and calf on Tuesday (October 24th) before he left for work heading south.
Michael, Powell River