With all the excitement of having Northern Resident Killer Whales in our area the other day, I did forget to post the updates from farther south. I also apologize to Roger Jennings who kindly contributed the A Pod photos. In case some of you didn't catch it, I called him Peter....well, it was a newsworthy report.

In other news April 27:
A small Harbour Porpoise stranded on Salt Spring Island has been taken into rehab at the Vancouver Aquarium by members of the Marine Mammal Response Network. A timely reminder that if you see a marine mammal injured, in distress or dead, please call 1-800-465-4336

The last report I received regarding Orcas came in yesterday from Bill T. He was walking his dog down close to the water around 10 pm on April 25th south of Powell River close to Myrtle Rocks when there were a number of blows. Since it was so dark and his dog was afraid of this unrecognized sound, he could not get closer for a count on the exact number of whales, but based on the reports, we can only assume it was the same pod known as the A5s. They were very slowly moving southward, almost drifting with the tide.
Susan MacKay Whales and Dolphins BC 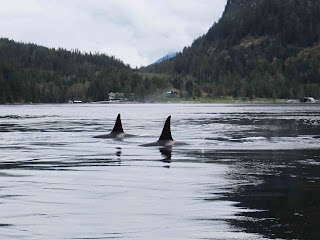 April 26: From the US:
More J pod reports in the San Juan Islands, Transient orcas in Puget Sound, up north in the islands and Monterey Bay, and a Gray whale report, along with porpoise,  and sea lions in Penn Cove.


April 26
Nice morning over here on the Marrowstone side. Finally saw a Gray Whale. Just after 7 a.m. this morning as I was walking south from East Beach. The whale was feeding immediately off the cemetary, then moved south along where there is a nice long sand bar and eelgrass flats that forms north of Nodule Point.
I stopped at the Nordland Store to tell anyone with interest, then went to the cemetary to see if I could see the whale from above. No sign of the Gray, but there were three, maybe more Harbor Porpoises slowly moving east and across the channel not too far south of Nodule Point.
Lots of seabirds moving around this morning and a huge armada of Surf Scoters - with the usual bands of Redbreasted Mergansers dining on "forage fish" nearshore. Seals hauled out on the rocks and a sea lion quite a ways offshore at East Beach. Peaceful waters. Getting ready for the next round of those trouble makers you all want to see! The Marrowstone Table is set for more Orcas!
Ron Hirschi, Marrowstone Island, WA  submitted by Susan Berta and Howard Garrett, Orca Network